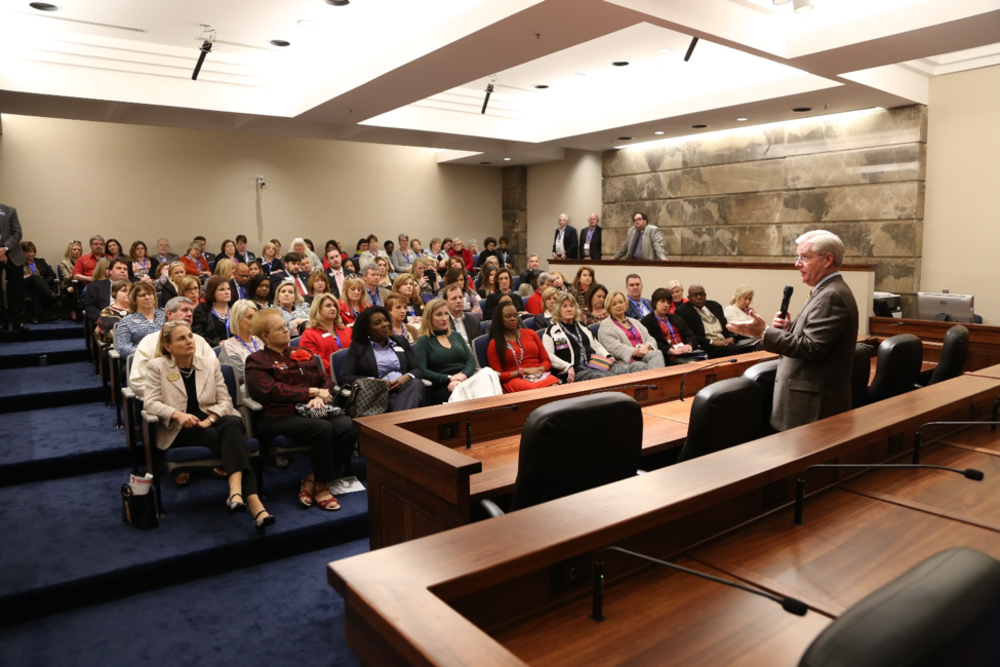 There was a lot at stake again this session for the real estate industry. The Alabama Governmental Affairs team remained visible in the 2017 Legislative Session. AAR continued to defend property rights and fight legislation that threatened the real estate industry. Some proposals were similar to the ones proposed in 2016. As always, some were new and unexpected. With many threats facing the real estate industry during the 2017 Legislative Session, Alabama REALTORS® defended the industry from any proposed legislation that would increase fees on real estate and negatively impact our members or consumers. Lawmakers considered proposals to raise property taxes, to eliminate the Mortgage Interest Deduction (MID) and to increase fees on real estate as ways to resolve the state budget deficit. Some of the proposals became bills that were filed, some did not.

Pictured Above: Senator Reed speaking to Alabama REALTORS® at the State House during REALTOR® Day.

Pictured Above: Senators discussing the Historic Tax Credit Bill before passage on the Senate floor.

Tax Reform is a popular topic in Washington and has trickled down to Alabama. Tax reform has been a priority among Alabama legislators and other government officials since the 2015 Legislative Session during which SB 409, a “flat tax” bill, was filed with 20 Senate co-sponsors. This bill would have eliminated the state Mortgage Interest Deduction (MID).

In the 2017 Legislative Session, legislators looked for ways to resolve the state budget deficit. Legislators serving on the Joint Legislative Taskforce on Budget Reform, HJR 62, passed in the 2016 Special Legislative Session in August, have been meeting since September of 2016.  The taskforce created five study groups, one of which has been reviewing existing state tax credits, deductions and exemptions including the Mortgage Interest Deduction (MID). The taskforce released an initial report on recommendations for budget and tax system reforms to the full legislature before the 2017 legislative session ended. In their initial report, the Tax credits, Exemptions, and Deductions Study Group recommended that the legislature form a joint committee to review the report on Alabama tax expenditures and adopt a joint rule that requires all bills that contain a credit, exemption, or deduction include a Sunset provision. The Taskforce will continue to meet and will release their final report recommendations by the 5th Legislative day of the 2018 Regular Legislative Session.

AAR’s Government Affairs Team successfully defended REALTOR® friendly tax protections and deductions in the 2017 Session. In 2015 and 2016, Alabama REALTORS® teamed up with the National Association of REALTORS®, launching the Alabama Homes Matter Campaign, successfully protecting and defending REALTOR® interests. The Alabama Homes Matter Campaign brought attention and visibility to protecting the MID and keeping fees off of real estate. Thousands of REALTORS® and consumers participated and made their voices heard to Alabama lawmakers on these important issues.

Bills Filed this Session that Highlighted Ambiguity in the Alabama License Law:

On Tuesday, February 14th, during the second week of the 2017 Legislative Session, Alabama REALTORS® hosted its annual REALTOR® Day at the Capitol welcoming over 200 REALTORS® from across the state to Montgomery. REALTOR® Day began with a REALTOR® Day Briefing and Advocacy Training at Alabama REALTORS® Capitol Conference, which gave an overview of the AAR 2017 Legislative Session agenda items: restoring the Historic Tax Credit, professionalism in the real estate industry, protecting private property rights, protecting the Mortgage Interest Deduction (MID) and defending against legislation that threatens the industry. REALTORS® from across Alabama converged at the State House for a state legislative briefing by Representative Ken Johnson (R-Moulton), Representative Paul Lee (R-Dothan), Senate Majority Leader Greg Reed (R-Jasper), Senate Minority Leader Quinton Ross (D-Montgomery) and Senate Rules Chair Jabo Waggoner (R-Vestavia Hills). After the briefing, Alabama REALTORS® visited the Senate and House Galleries where they were recognized by the full House and Senate. The day concluded with the Legislative Reception, which was attended by our members and elected officials from across the state.

Pictured: Rep. Paul Lee and Rep. Ken Johnson (above) and Sen. Ross and Sen. Waggoner (left) speaking to the Alabama REALTORS® at the Alabama State House on REALTOR® Day.

When the dust settled in after the 2017 Legislative Session, a “flat tax” bill was not filed, the Mortgage Interest Deduction was not threatened and the Mortgage and Deed Recording Fee Bill did not pass committee. All legislation that would adversely affect private property rights was defeated, and the Historic Tax Credit Bill was passed!