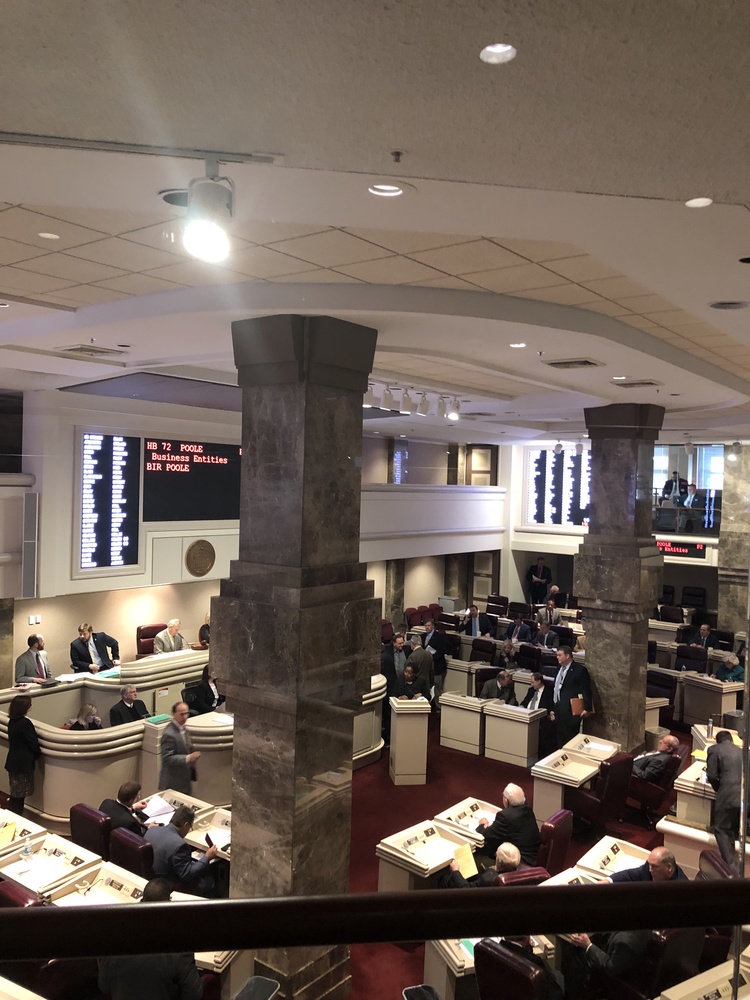 Severe winter weather significantly impacted the second week of the 2018 Regular Session.  While the Legislature convened as scheduled on Tuesday afternoon, snow fell that night leading the legislative leadership to cancel Wednesday’s committee meetings. The result was a jumbled calendar for Thursday, with committee meetings occurring before and after the House and Senate convened.

The Senate did not take up any legislation on Thursday and instead recessed immediately for committee meetings. The House passed three bills before adjourning for the week. Many committee chairs rescheduled their meetings to this week.

Tuesday was Military and Veterans Appreciation Day in the House of Representatives and included a service honoring Alabama’s living recipients who received the Medal of Honor, the nation’s highest military award.  The House then took up four bills designed to benefit veterans and current military personnel.

Among the bills that passed the House were:

On Tuesday, Chairman of the Senate Sunset Committee, Paul Bussman (R-Cullman) and his colleagues reviewed “sunset” bills on the Senate floor. Certain agencies, boards, and commissions “sunset,” or lapse, every few years, requiring the legislature to determine if they provide value and pass a “sunset” bill to continue the life and operation of the entity. The majority of these bills passed with no objections, including bills to reauthorize the Sickle Cell Oversight and Regulatory Commission, the Surface Mining Commission, and the State Oil and Gas Board.

The Senate chose to use Thursday as its committee day, rather than taking up legislation as a body. The Committee on Finance and Taxation General Fund gave a favorable report to a Senate Republican Caucus agenda item, SB 93, sponsored by Senator Arthur Orr (R-Decatur), which would establish procedures allowing Medicaid to place a lien on the property of a Medicaid recipient to recover medical payments. The committee carried over SB 130, sponsored by Senator Trip Pittman (R–Daphne), which would make changes to the Simplified Seller Use Tax Remittance Act (SSUT), that passed the Legislature in 2015. SSUT allows for online sellers, such as Amazon, to lock in a lower sales tax of 8% if they opt in. The bill would clarify that sellers remain eligible to pay the lower rate even if they have a brick-and-mortar presence in the state through an affiliate. The introduction of the bill was prompted by Amazon’s acquisition of Whole Foods last year, which triggered a review of whether the online retailer could continue to pay the flat 8% tax. The bill remains the subject of considerable controversy between the state and counties and municipalities.

The Senate Committee on Tourism and Marketing gave a favorable report to SB 143, sponsored by Senator Bobby Singleton (D–Greensboro), which would allow the state to regulate transportation network companies, such as Uber and Lyft, and make it easier for these businesses to operate state-wide.

SB 98, sponsored by Senator Arthur Orr, passed the Senate last Tuesday and received its first reading in the House and has been referred to the House of Representatives Committee on Economic Development and Tourism.  SB 98 allows counties to abate rollback ad valorem taxes for certain projects that qualify for incentives under the Alabama Jobs Act.

A Look at What’s Ahead

The Legislature has used four of its available 30 meeting days for the 2018 Regular Session. The Session can last until April 23, but the legislative leadership is still anticipating adjourning by late March to begin campaigning at home.

The House will re-convene on Tuesday, January 23rd at 3:00 p.m., while the Senate will reconvene on the same day at 2:00 p.m. This week is anticipated to be a two-day legislative week, with Wednesday reserved for committee meetings.

There are a number of bills on the House calendar for debate on Tuesday.  HB 17, sponsored by Representative Steve Clouse (R-Dothan), would allow the governor to appoint a person to fill a vacancy for the office of United States Senator until the next general election.

According to the State Fiscal Office, if this bill had been in place prior to the 2017 election cycle, there would have been an estimated savings of approximately $10 - $12 million dollars and a special election would have been avoided.