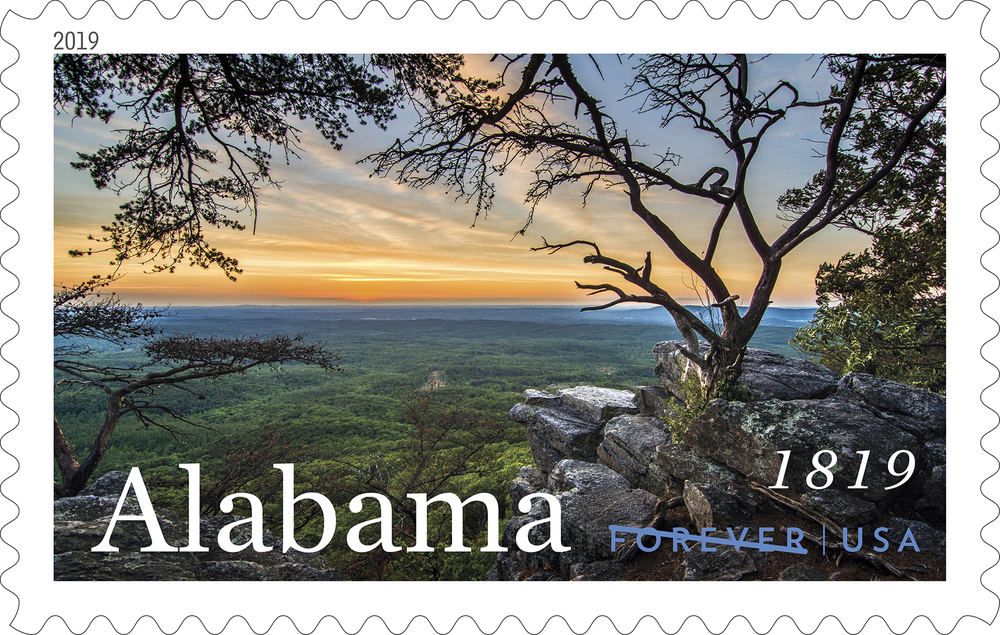 The U.S. Postal Service today commemorated Alabama’s bicentennial and entry as the 22nd state in the union with the unveiling of the Alabama Statehood Forever stamp during the Alabama200 ceremony at the EarlyWorks Children’s Museum in Huntsville, AL. News of the stamp is being shared using the hashtags #AlabamaStamp and #Alabama200.

“Since becoming America’s 22nd state on Dec. 14, 1819, Alabama has built a rich history grounded in the diversity, tradition and hard work of its people, and the natural beauty and wonderment of its land,” said USPS Acting Chief Human Resources Officer Isaac Cronkhite, who officially dedicated the stamp. “Alabama has been pivotal in the growth of our nation to constantly strive to be a more perfect union.”

Among its cities are Mobile, Alabama’s only saltwater port city and home to America’s original Mardi Gras, and Huntsville, nicknamed “Rocket City” for its role in the U.S. space program. Birmingham is the largest city, and Montgomery is the state capital.

Alabama was at the center of many important events in the civil rights movement of the 1950s and 1960s, which are memorialized in national historic monuments and sites across the state.

The natural and diverse beauty of the state can be experienced in its many state parks. Alabama boasts 38 national historic landmarks, a national nature preserve, four national forests, eleven national wildlife refuges, a national military park, and a national heritage area.

Food festivals, museums, a renowned Shakespeare festival, historic homes, and public gardens are among the state’s other attractions.

Customers may purchase the Alabama Statehood Forever stamp at The Postal Store at usps.com/shop, by calling 800-STAMP24 (800-782-6724), by mail through USA Philatelic, or at Post Office locations nationwide. Forever stamps will always be equal in value to the current First-Class Mail 1-ounce price.

Information on ordering first-day-of-issue postmarks and covers is at usps.com/shop under “Collectors.” A video of the ceremony will be available on Facebook.com/usps.

The Postal Service receives no tax dollars for operating expenses and relies on the sale of postage, products and services to fund its operations.