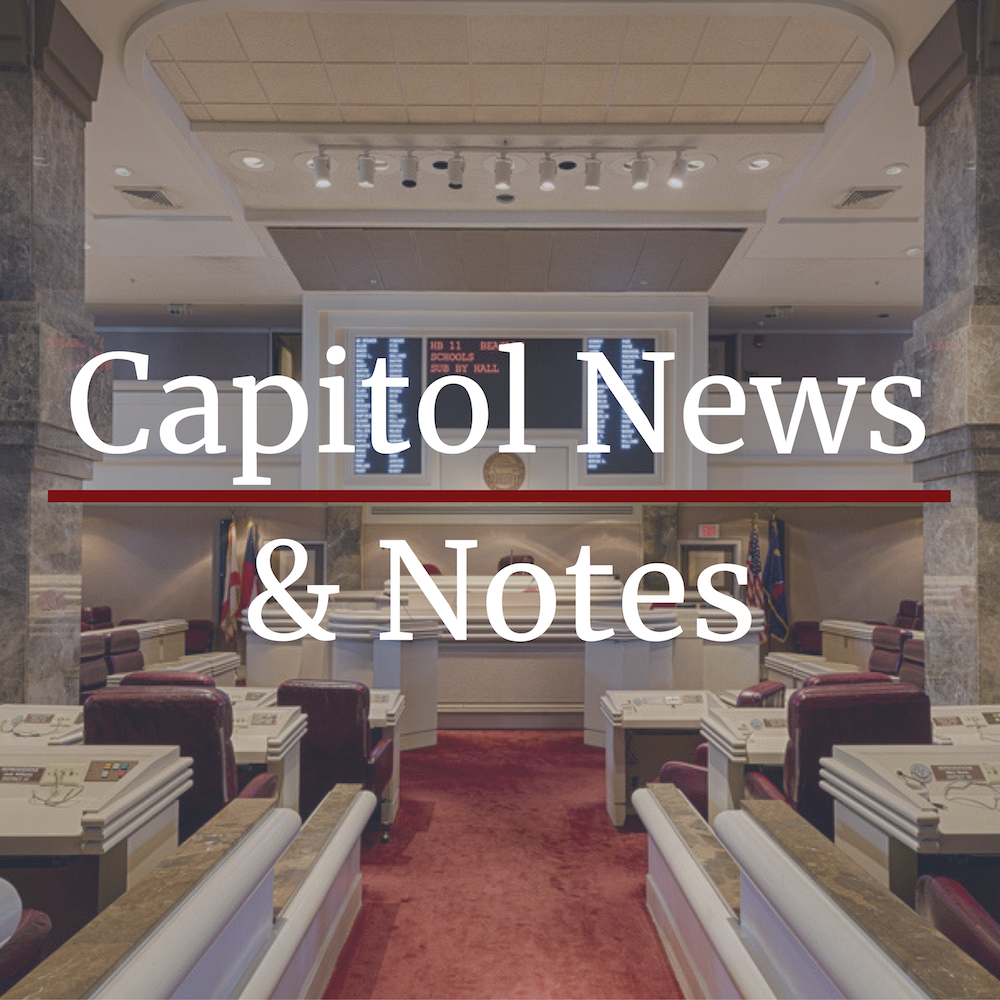 Today, the Legislature enters its 11th total week with 9 legislative days remaining. The Legislature will meet this week and next. There are rumors they may adjourn sine die (ending the session) on Friday, May 31. So, these final two weeks will likely be busy as the budgets are debated in the final house and multiple hot button bills come up. Big-ticket legislation includes Senator Albritton’s lottery bill, which is on today’s special order calendar in the House, a bill to allow marijuana use for specific medical purposes, and Senate President Pro Tem. Del Marsh’s bill to change the structure of the state’s education governance. These next two weeks the Legislature plans to meet three days and four days respectively.

Earlier this legislative session, Senator Coleman-Madison (D-Fairfield), sponsored SB 10, a bill relating to service animals and public accommodations. In general, SB 10 creates penalties for the fraudulent misrepresentation of pets as service animals in public spaces and accommodations and brings state law in line with federal law. Alabama REALTORS® has been supportive of the legislation and monitored SB 10 as it moved through the process.

Last week, an amendment was to be considered in the House Judiciary Committee that added significant penalties and burdens on property owners. The amendment would have drastically increased potential liability for owners and managers of public accommodations in commercial, retail, apartment and in some cases, residential property management settings. The amendment created a series of fines for violations between $1,000 and $5,000 for violations in addition to attorney’s fees and court costs.

Alabama REALTORS® and other state holders worked to oppose the amendment.  These efforts and voiced concerns ultimately led to the successful defeat of the harmful amendment, and the AAR-supported version of SB 10 will move forward to the full House of Representatives for final passage.

The REALTOR®-supported HB 338 passed the Senate Government Affairs Committee on Tuesday, May 14! Sponsored by Rep. David Faulkner (R-Birmingham), HB 338 allows home purchasers to complete an affidavit to claim homestead exemptions and is intended to make the exemption process more efficient for consumers.

In the committee meeting, Rep. Faulkner spoke in favor of the bill. Sen. Dan Roberts (R-Birmingham) moved to give the bill a favorable report, and Sen. Shay Shelnutt (R-Trussville) seconded. The bill received a unanimous vote in favor of passage. The bill now awaits consideration by the full Senate before final passage.

The House Ways and Means Education (WME) Committee approved HB 428, sponsored by Rep. Joe Lovvorn (R-Auburn). The bill, supported by Alabama REALTORS ®,  creates an income tax credit for the construction or purchase of a storm shelter that is attached to the taxpayer’s primary residence or the same property as their primary residence. The credit is for $3,000 or 50% of the cost of the shelter, whichever is less. The bill also allows a taxpayer who buys or constructs the shelter on behalf of another to receive a credit of $4,500 or 75% of the cost, whichever is less.

Shelters that are eligible for the credit must be capable of withstanding an EF5 tornado and meet or exceed current Federal Emergency Management Agency criteria for safe rooms. The bill limits total credits the state can allocate to an aggregate of two million dollars annually, and sunsets in 2023.

In the committee meeting, Rep. Lovvorn spoke in favor of the bill. Following discussion on the bill, Rep. Danny Garrett (R-Trussville) made a motion to give the bill a favorable report out of committee. Rep. David Faulkner (R-Birmingham) seconded the motion. The bill was then passed by a unanimous vote, and now awaits consideration by the whole House for final passage.

HB 540, titled the Alabama Incentives Modernization Act, is geared towards attracting new and expanding businesses in Alabama by modifying some currently existing tax credits, as well as establishing an Opportunity Zone (OZ) investment program and income tax incentives for technology companies to move their headquarters to Alabama. Probably the biggest feature of the bill is its OZ component.

The bill provides extra incentives for OZ investment funds nationwide to invest in Alabama OZs. Detailed information on the OZ program can be found in this article published by the Legal Helpdesk. Essentially, OZs are areas designated by state governors which allow investors to take gains from the sale of stocks and other financial instruments and put those gains into projects (like real estate development) for a period of time in those areas- if the investments are kept in those areas for at least 10 years, the gain realized from the value in those investments is tax free. “The incentives HB 540 provides encourage investors to choose Alabama OZs, rather than OZs in other states. These include deferrals on state capital gains taxes and state income taxes, and financial institution excise taxes are made eligible for an “impact investment credit” if the funds meet certain criteria (time investments are kept in Alabama, return on investment, etc.). The Alabama Department of Economic and Community Affairs (ADECA) would oversee operations of these funds.

HB 475, titled the Alabama Rural and Agribusiness Jobs Act, authorizes the Department of Commerce to issue a tax credit certificate to taxpayers who make contributions to certain funds targeted at rural growth. The bill provides credits against the state’s insurance premium tax credit in 2021 and after for investments by insurance companies in growth funds that make investments in businesses located in certain areas of Alabama, which include areas outside of urban areas with populations of over 50,000 or Opportunity Zones. The bill is a complement to HB 540 and is meant to bolster economic growth in areas not covered by the OZ program.

HB 540 then moved the House floor and was passed on May 16. It now moves to the Senate Committee on Finance and Taxation Education for further consideration. HB 475 is pending passage in the House. The Alabama REALTORS® are supportive of both bills that promote economic growth and investment in Alabama.