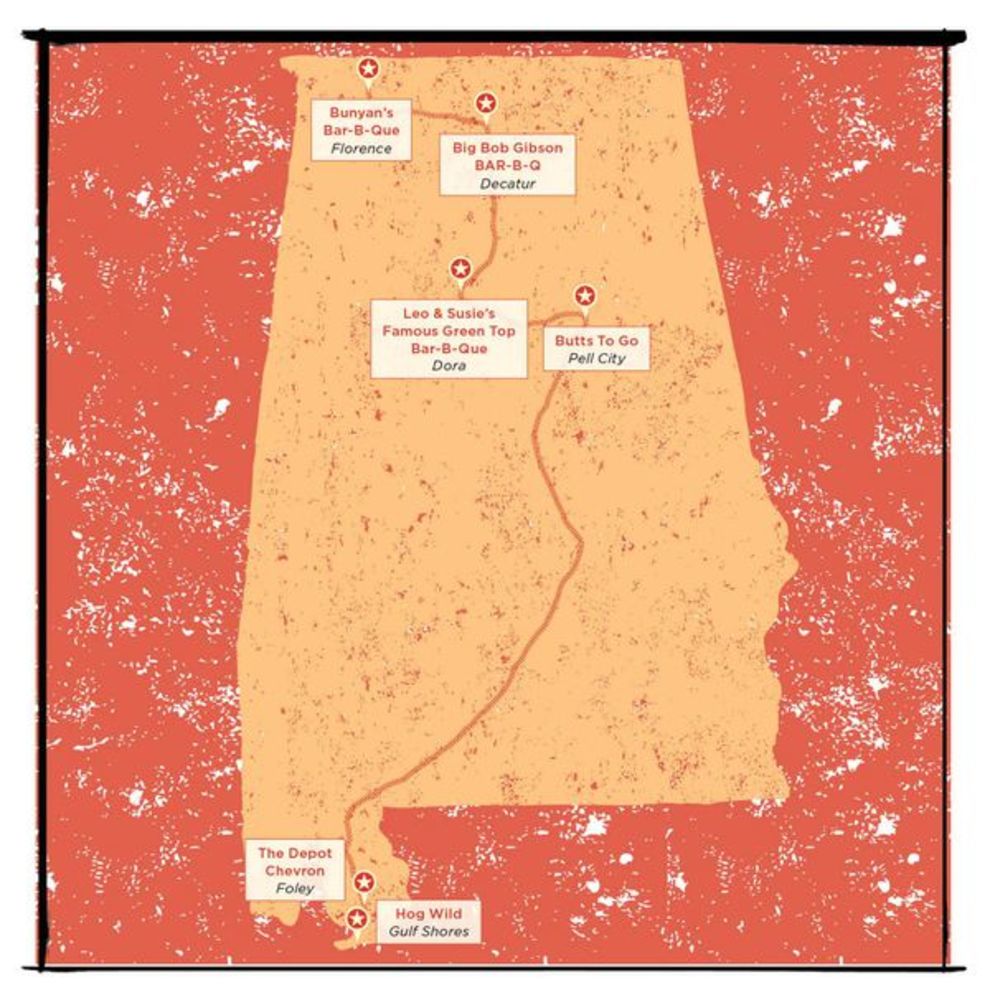 When white sauce is considered controversial, you know you live in a barbecue state. Few communities in Alabama lack bragging rights on the best barbecue, as there are pits and smokers found in every community, from big restaurants to roadside stands to the back of gas stations. While many connoisseurs claim that only pig is true barbecue, there are offerings in chicken, turkey, and a few renegades—mostly from Texas—who profess at the barbecue altar of beef. For those barbecue lovers who travel around Alabama, don’t miss out on this meaty elixir of life. Our state is blessed with passionate pitmasters and tasty offerings.

Add some spice to your barbecue by topping your smoked pork sandwich with cayenne-enhanced mustard-based slaw. Bunyan’s uses shoulders instead of butts and invented their unique slaw topping. While you wait to dive in, you can sit at one of picnic tables or two-tops in the small mom-and-pop, now mom-and-son, restaurant. Try the banana pudding, made the old-fashioned way (without cooking the bananas).

First of all, no one would trust a guy named Little Bob with their barbecue. When you enter this mecca of ’cue, you have to work your way around multiple giant, hog-sized grand championship trophies—that they won with their white sauce. The husband of Bob’s granddaughter, Chris Lilly, embraced the family business and reigns as nationally known barbecue guru. Some even consider the ribs a meditative experience.

This former honky-tonk serves more sweet tea than beer these days, and definitely more barbecue. It still can get wild on football days, and waitresses still jot down orders on a napkin, but it’s a tamer version of the old roadhouse. The chopped barbecue is almost a side order for the fried sweet potatoes and pickles.

Wade Reich spent 21 years working in Paris and London in the food industry. When he retired back to Alabama, he bought a Texaco station for income. When the prices went up, his profits went down, so he started smoking meat and selling it at the station. His pulled pork can be eaten with sauce, but doesn’t need it. The lemon chicken wings could fly on their own flavor. Try the potato salad, made with cream cheese. You can take your meal home, or eat in the ambiance of tables lodged between WD40 and snack crackers.

If you prefer Carolina-style chopped meat, make a slight detour onto Highway 98 in Foley on the way to the beach. You’ll immediately spot a Chevron with a giant pink pig statue straddling dual columns. You can get everything from ribs to pig feet. The meat is salted, not rubbed, and comes with gobs of tangy sauce and barbecue slaw.

Smoked chicken with white sauce tops the menu of this barbecue restaurant owned by two young University of Alabama grads who were looking for a career and found a smoker. T.J. Allen wins awards with the Memphis-style dry rub he created and puts on his pork, which is cooked over pecan wood. The result is a sweet taste. Try any and all of their housemade sauces, especially the Surfin’ Whiskey.

This story appears as part of a larger Beer & Barbecue package in Birmingham magazine’s June 2019 issue. To see it in full, subscribe today!