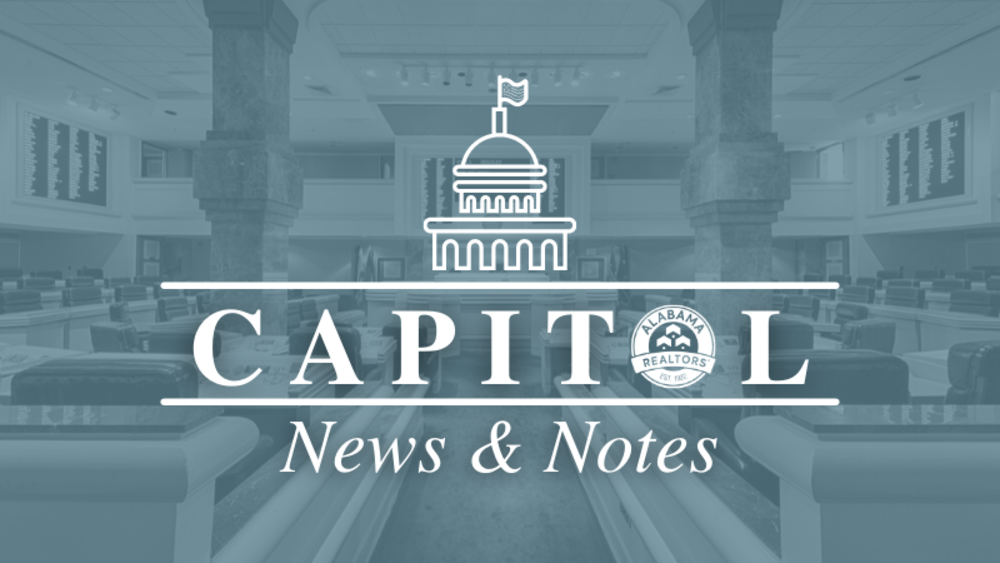 Last week, the Legislature met for two legislative days on Tuesday and Thursday with Wednesday as a committee day. They have now completed 27 of 30 possible session days. As of today, May 4, the House has introduced 648 bills, and the Senate has introduced 405 bills. The House and Senate reconvened at 2 p.m. this afternoon.

REALTOR®-Sponsored Homestead Exemption Bill Headed to Governor - HB344, sponsored by Rep. David Faulkner (R-Mountain Brook) and eight co-sponsors, will give county tax assessing officials the option of receiving claims for homestead exemptions electronically. This bill passed the House last year, but due to session ending abruptly because of COVID, it did not make its way through the Senate. This year, the bill passed through the House in mid-February and received a favorable report from Senate Governmental Affairs Committee in late March. On Thursday, Sen. Shay Shelnutt (R-Trussvile) introduced the bill to the Senate for a vote. Sen. Randy Price (R-Opelika) introduced an agreed upon amendment which would give the Alabama Department of Revenue the final say on the form to be used in filing a homestead exemption. The amendment was adopted, and the Senate voted to pass the bill unanimously with a 26-0 vote. Due to the amendment, the bill was sent back to the House, and the House voted to concur with a 99-0 vote. The bill will now head to Gov. Ivey’s desk for signature. Thank you, Rep. Faulkner and Sen. Shelnutt, for your work on this important issue!

Budgets Are on The Move - With only three legislative days left, it is no surprise that there was a lot of budget action last week. Both budgets include spending increases over 2021 and include pay raises for state and education employees, including K-12 and community college employees. Last Tuesday, the House passed the Education Trust Fund (ETF) budget coming in at a record $7.65 billion dollars. Due to amendments in the House, the ETF budget went back to the Senate for concurrence on Thursday. The Senate voted to concur, and the budget was sent to Gov. Ivey for signature. On Thursday, the Senate also considered the General Fund budget. The proposed $2.4 billion budget was approved by the Senate, but it was sent back to a conference committee to review some changes. The conference committee for the General Fund will have to be held early next week.

Wine Delivery Bill Passed by Senate - HB437, sponsored by Rep. Terri Collins (R-Decatur), would allow wineries to ship wine directly to of-age Alabamians. Notably, this bill would not allow retailers to ship to residents. On Thursday, the bill was passed by the Senate unanimously in a 27-0 vote. Due to Senate amendments, the bill went back to House, where it voted to concur with the changes in an 88-5 vote. The bill now heads to Gov. Ivey’s desk for her signature.

Innovation Commission Bills Receive Favorable Report - HB540, sponsored by Rep. Bill Poole (R-Tuscaloosa), would establish the Alabama Innovation Commission, which would promote specific initiatives and strategies for improving innovation and technology in Alabama.  HB609, sponsored by Rep. Jeremy Gray (D-Opelika), would create the Innovate Alabama Matching Grant Program, which would allow the Alabama Innovation Corporation to make matching grants of up to $250,000 for entities receiving certain federal grants. These bills were designed to help spur economic development and to be able to attract and retain talent in Alabama. Two weeks ago, these bills passed the House, and last week, the Senate Fiscal Responsibility and Economic Development Committee voted to give both bills a favorable report. The bills now move to the Senate for consideration.

This week marks the last full week of the 2021 Legislative Session. There are still some big issues, including the gambling bill and the medical marijuana bill, that are expected to see votes this week. The Legislature will meet today and Thursday with Wednesday as a committee day. It is expected that they will then break for one week and come back on May 17 for the final legislative day before adjourning sine die.