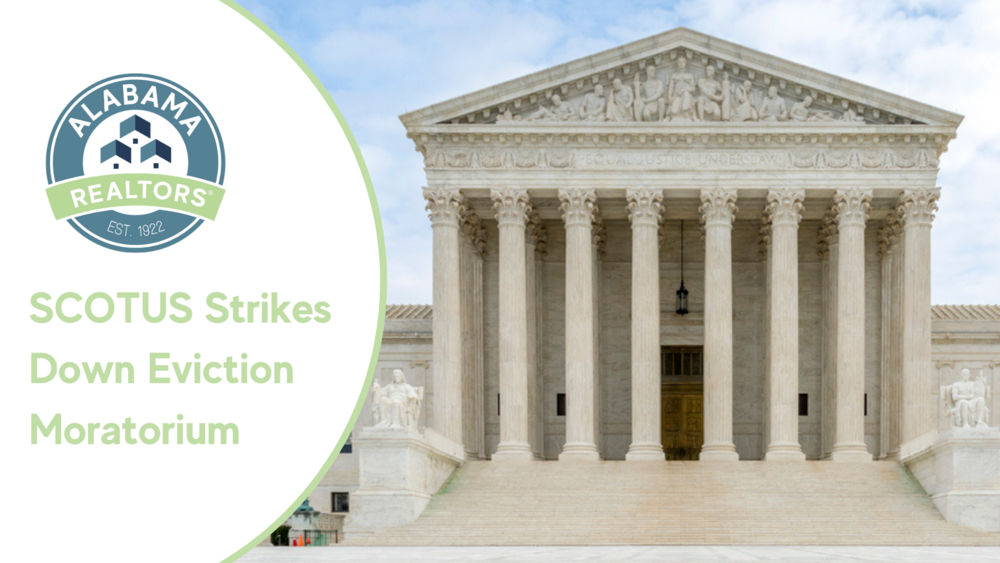 In a huge win for property rights and rental owners, the U.S. Supreme Court last week overturned the nationwide eviction moratorium issued by the Centers for Disease Control and Prevention (CDC). This means that evictions for non-payment of rent are no longer prohibited by the federal government.

The Alabama REALTORS®, Georgia Association of REALTORS® and REALTORS® who are rental owners in each state filed the lawsuit in November 2020, in conjunction with the National Association of REALTORS®. In May 2021, the lower court struck down the CDC’s eviction moratorium but put the ruling on hold (i.e., stayed the ruling) pending the CDC’s appeal. The REALTOR® parties appealed the stay, asking the higher courts to allow the May decision to be effective even during the CDC’s appeal. The appeal of the stay found mixed success in Justice Kavanaugh’s opinion stating that, although he declined to lift the stay, the moratorium needed congressional authorization to extend beyond the July 31st deadline. The CDC initially allowed the moratorium to expire but reversed course quickly, reinstating the moratorium from August 3 to October 3, 2021. The REALTOR® parties quickly filed an emergency motion to halt the extension, a motion that was ultimately granted by the U.S. Supreme Court on August 26 by a 6-3 vote.

Looking forward, the CDC has the right to appeal the district court’s underlying decision from May but that decision is effective currently, allowing evictions to proceed.