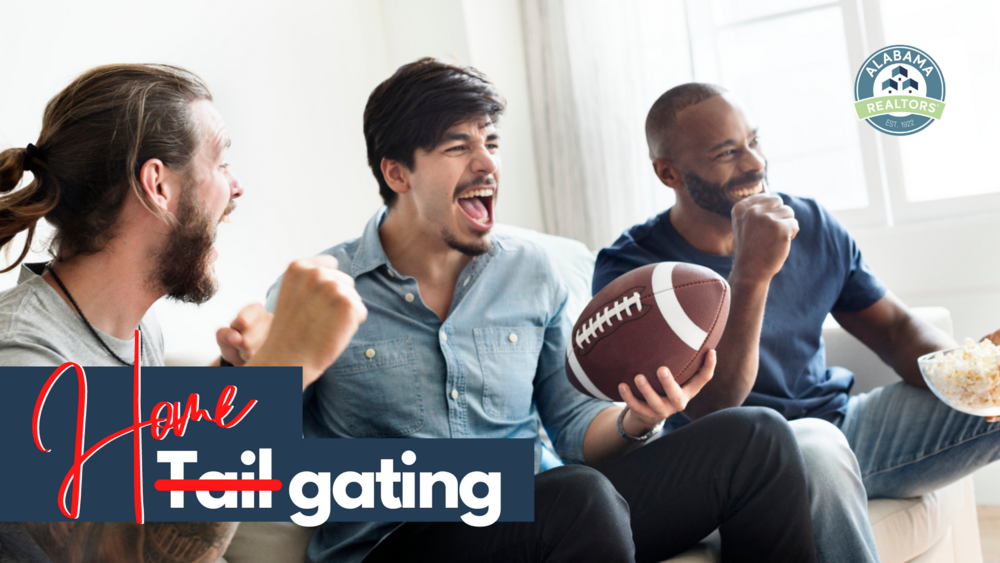 Ahhh…there’s nothing like the aroma of meats sizzling on a grill, beverages submerged in a tank of ice and tempting homemade desserts nestled on a platter. Your favorite team is warming up at the stadium as your friends arrive to share the American tradition of tailgating – at your house. Homegating, an alternative to the campus crowds, monster RVs, catered tents and travel, essentially brings the elements you love best to your own backyard.

Inside Tailgating says homegating offers several advantages over traditional on-campus spreads: less stress transporting, parking and unloading your setup; lower cost since there are no tickets to buy, parking space or tailgate spot to rent; and the comfort of your home, yard, bathrooms and television.

Kickoff the 2021 season in style with these fun homegating tips and ideas:

Setup for a Win

Stick with a simple game plan that allows your tailgate team to enjoy the day without hours of labor. Though campus tailgates have evolved into elaborate catered events with rented tents, chairs, coolers and signs, it’s fun to go back to your tailgating roots with folding tables and chairs, disposable plates and cups, plastic table cloths and paper napkins. Don’t forget to incorporate the team colors and use the flags, banners and pompoms you would have taken to the game anyway. If you have a tent, incorporating it as part of the décor on the lawn or at the entrance to your home can add to the game-day atmosphere.

Love to decorate?  Here are some fun do-it-yourself projects for tabletop and beyond.

You’re sure to score with game-day mainstays like burgers, brats, wings and barbecue. Get a grill partner – because there’s more fun in numbers – and contribute some enticing smoke to the atmosphere. Recipes for easy game-day fare can be found here. In the south, guests always offer to bring something, so let them. Side dishes, salads and desserts made from their favorite recipes will make everyone feel like a varsity player on your tailgate team. If you need a coach, there’s a homegating playbook – Game-Day Eats: 100 Recipes for Homegating Like a Pro, by former NFL player Eddie Jackson. Now a celebrity chef/coach, Jackson appears on Food Network’s BBQ Brawl. If cooking over a hot grill is not your idea of football season fun, look for special tailgate packages at your favorite barbecue or wing joints.

Keep up the team spirit with plenty of ice-cold beverages. Use your team branded or other favorite cooler and serve beverages at a separate station, if possible, to keep guests from crowding in one spot. If alcohol is part of your football tradition, add a special game-day offering like Game Day Sangria to the usual cooler of beer and soft drinks. One special drink made in a batch allows you to watch the game instead of tending the bar.

Fun in the Sun or Shade

There’s just something irresistible about a corn hole board and those little beanbags. Before the team takes the field, get your homegate guests ready for action with corn hole and a few other classic lawn games like bocce, croquet, yard darts and horseshoes. Since you don’t have to lug the corn hole board or games to the stadium, you’ll be the real winner.

A backyard putting green with a twist is a sure hit with golfers and duffers on your squad. Putter Pong, kind a cross between golf and skee ball, uses real golf balls, a putter and artificial turf.

Photos or It Didn’t Happen

Make homegating photos pop on social media with an easy-themed backdrop. A team blanket hung on a wall or blank wall adorned with banners, steamers or logos give your guests a fun way to post the fun. Don’t forget props like pompoms, a football and other fan gear to bring the photos to life.

Get Your Game On

Nothing is more important than the game and technology has evolved so that game day can be an inside or outside gathering (weather permitting, of course). All you need is cable service or a smart TV and streaming service like Hulu + Live or Sling. Most streaming services allow you to buy “skinny bundles” of sports networks or build your own bundle based on networks you watch. Before game day, make sure you’re subscribed to the network for your team’s game via a cable provider or streaming service. If the game is featured on one of the over-the-air networks like CBS, ABC or NBC an antenna will get the game without a subscription fee. Cordcutting.com has a great guide for watching college football without cable.

As autumn temperatures make the outdoors more pleasant, consider moving the TV outdoors. Inside Tailgating suggests hooking it up early so that there are no hiccups during the game. To protect the television, make sure it’s stable and in a shady area, then take it inside right after the game.

Cheers to the teams, their fans and homegating fun in 2021.