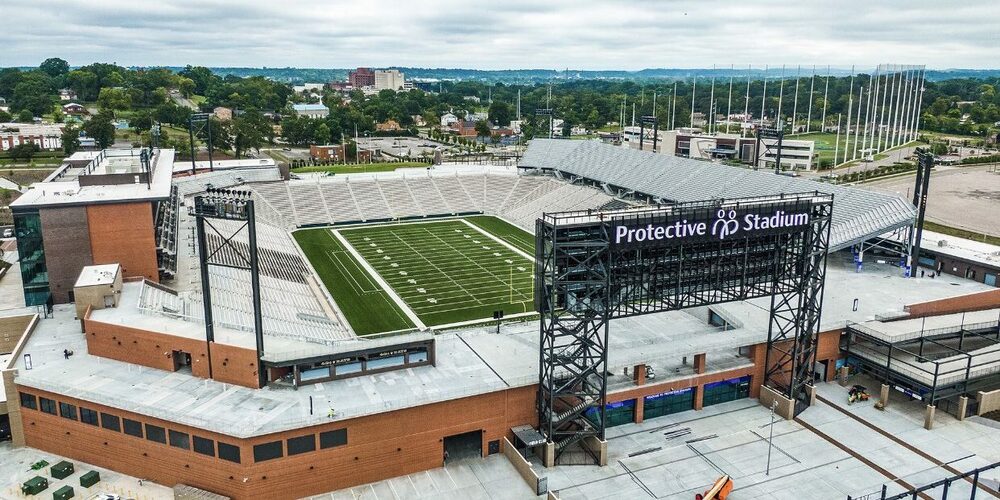 Fox Sports has set its sights on Alabama’s Magic City as a potential landing spot for the home of the United States Football League (USFL), which is slated to begin playing as a spring league in April 2022.

Negotiations have long been underway for Birmingham to play host to the USFL, which will differ from that of previous attempts to jumpstart the professional football league.

Under the proposal, Fox Sports is serving as the lead entity to establish the USFL, marking the first time a broadcast network has taken the lead in such an effort. Fox Sports has acquired all copyrights to the USFL brand along with branding of the league’s former teams. Other national broadcast partners, one of which is believed to be NBC, have committed to airing primetime broadcast for USFL games.

If a deal is struck between the network giant and Birmingham stakeholders, the city will become home to the eight-team league, where all USFL activity during its first year of competition will take place.

As Fox Sports is the sole owner of the USFL, Birmingham, by way of the network broadcasting the USFL’s 10-week regular season along additional weeks for playoff games, would garner tremendous publicity.

In a statement provided to Yellowhammer News, State Sen. Jabo Waggoner (R-Vestavia Hills) expressed his belief that the proposal from Fox Sports is a “once in a lifetime” opportunity for Birmingham.

“I attended the presentation last week by the USFL League organizers. This is a once in a lifetime, unprecedented opportunity for Birmingham,” Waggoner stated. “This league is unlike anything else I have seen before. The league owner is the broadcaster. Never before has a professional football league proposed playing all league games for an entire season in a single city.”

Waggoner made mention of the investment in Protective Life Stadium, which he believes would serve as an ideal venue to host league competition.

He added, “This league has sound financial backing, has solid national broadcast agreements and they are committed for the long haul. We invested $200M to build this stadium, to be in a position to take advantage of opportunities like this. I just never thought it would happen this quickly. I expect all involved at the local level to find a way to make this happen for Birmingham.”

With billions of minutes of airtime exposure over the course of the season, many see great potential for Birmingham’s tourism industry, which would receive a direct boost from hotel accommodations provided to USFL teams. Many say the broadcast deal would see Birmingham garner visibility on the national stage the likes of which the city has never before seen.

Each game is estimated to have a per-game audience of approximately 1.4 million on main broadcast platforms, with 700,000 viewers tuning in on cable. Additionally, Fox estimates that the USFL will garner 40 million viewers over the course of the season, resulting in 10 billion viewing minutes over the entirety of the season.

State Sen. Rodger Smitherman (D-Birmingham) echoed Waggoner’s sentiments in stating that Birmingham leadership should take full advantage of the offer presented to them.

“Protective Stadium took 20 years to become a reality,” Smitherman said in a statement to Yellowhammer News. “It took the Jefferson County legislative delegation, the City of Birmingham, the County and the BJCC all at the table working together to put the pieces in place for a first class economic and entertainment venue.”

“The stadium is complete. Now the work becomes laser focused on continued events recruitment and keeping seats filled,” he added. “Events will generate revenue which helps with community development. As we reshape how the world views Birmingham and Alabama, I believe the ball will not be fumbled and we will score a win with Fox Sports Network exposure.”

As Protective Life Stadium would serve as the main facility for which USFL games will be played, Legion Field will also be utilized for hosting games as well as practice activities. With Protective Life Stadium boasting state-of-the-art facilities, many see the city as being ripe for such an investment as is in the works with Fox Sports.

The deal would receive an initial $200 million investment from Fox, with the goal of raising an additional $250 million from numerous wealthy investors in the future. This unprecedented amount of financing, coupled with a unique broadcast scenario with four nationally televised games per week, the city of Birmingham stands to reap vast economic benefits from the deal.

Yellowhammer News spoke to Gene Hallman, president and CEO of Bruno Event Team, who outlined the unique scenario which Birmingham finds itself in regarding the first-of-its-kind offer before it.

“This is the single biggest sports opportunity I have seen that has been offered to the Greater Birmingham community, and I’m including 1996 Olympics soccer,” advised Hallman. “The combination of the economic impact, which is going to be tens of millions of dollars, combined with the incredible amount of television exposure over a 13-week timeframe is unprecedented.”