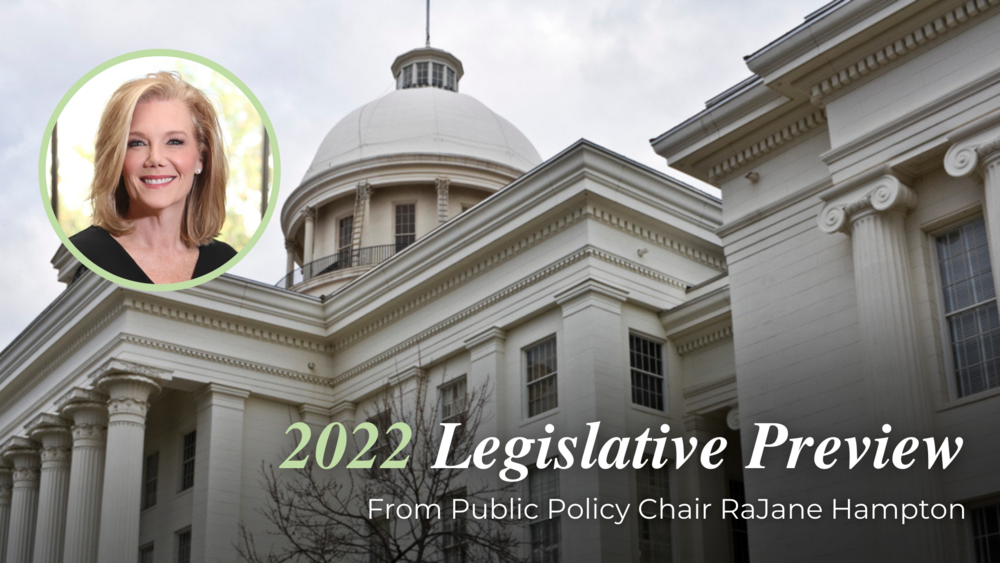 Today marks the beginning of the 2022 regular session of the Alabama Legislature. As an election year, the session begins and ends early, allowing legislators to return to districts and campaign before May 24 primaries. So, barring a COVID setback, the Legislature has until April 25 to hold 30 legislative days.

In general, we hope 2022 will see a return to a more normal session with unhampered access to the State House after two years of COVID-shortened or affected legislative sessions. While this is our hope, the Alabama REALTORS® Public Policy Committee will continue to work with staff to monitor legislation on behalf of our members, their businesses, and private property rights in whatever setting is required.

As an election year, we expect to see a focus on bills that can be touted by campaigns back home rather than highly controversial items. This especially holds true after 2021’s two special legislative sessions handled several hot topics. With that in mind, we are monitoring for bills that impact real estate professionals and private property owners, like increased taxes or fees. Here are some of the major topics we expect to be discussed this year.

As always, the two appropriation bills, or budget bills, will play a large role in the session. Although the financial outlook for both budgets for the next fiscal year appears to be sound, the requests from state departments continue to increase as costs increase. Legislators have also stated a desire to provide pay raises for state employees and teachers.

Alabama has been under federal court order to reform its prisons, from physical conditions to staffing to mental healthcare provision. A special session took up the issue of building new prisons in 2021 and planned to partially fund construction with around $400 million in ARPA funds. However, the U.S. Treasury Department released a final rule on allowable uses for ARPA funds last week that has cast some doubt on the plan. State leaders have indicated that the plan remains unaltered.

Whether its prison construction or other items, a big part of this legislative session will be allocating the over $1.5 billion in ARPA funds received or to be received by the state.

Expanding access to broadband is a frequent flyer at legislative sessions. Alabama’s need for increased access to broadband in rural areas has been well documented with extensive mapping completed recently showing where the state has or lacks coverage. Addressing the shortages is a priority for legislators.

A common topic the last several years, gambling is expected to come up this year as well. It remains to be seen what this year’s iterations will look like, although the elections this year will impact the issue.

The party caucuses in the House and Senate will also push their own agendas of issues. The House Republican Caucus announced its agenda, called “Standing Tall,” covering topics like permitless gun carry and critical race theory ban. Neither the House Democratic Caucus nor the Senate caucuses have announced their agendas yet.

The Alabama REALTORS® public policy team is looking forward to providing weekly updates from the State House.  Stay up-to-date on the 2022 Alabama Legislative Session with Capitol News & Notes, which can be found in our weekly newsletter, Real Estate Alabama, and under the public policy tab on our website.