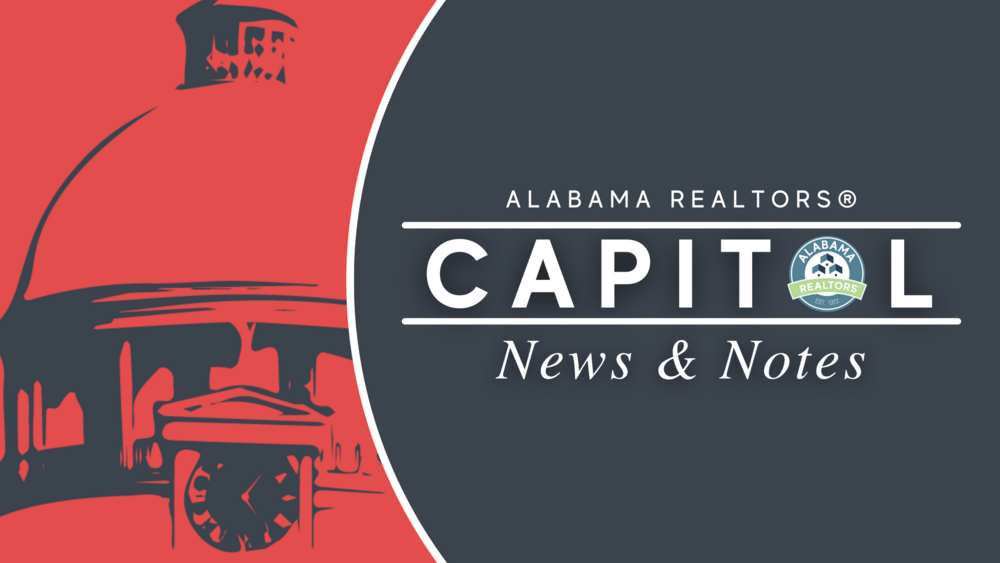 The special session officially concluded last Thursday, and the regular session reconvened today. Last week was relatively quiet from a legislative standpoint as legislators quickly passed agreed-upon legislation, but that’s not to say everything was quiet. Here are the highlights from the special session last week.

The Legislature passed and Governor Ivey signed an appropriation bill for $772 million in American Rescue Plan Act (ARPA) funds the state has received. A significant portion of the funds will go to broadband expansion in the state. Alabama REALTORS® has long supported broadband expansion efforts and, as part of a broadband coalition, has pushed for better access for those parts of the state with limited to no broadband access. Now, Alabama will have about $277 million for broadband projects across the state. The second-largest item in the bill is $225 million for water and sewer structure. This has been an issue for some time in rural areas of the state that lack the population density for a centralized water and sewer plant or have soil that is not conducive to septic systems. You can view the bill, as signed into law, with the full breakdown of what will receive funding here.

Last Monday, an Alabama federal court overturned the recently updated Congressional district map and delayed qualifications by two weeks for those running for the U.S. House of Representatives this year. While the state Attorney General has appealed the decision, the decision was not stayed so legislators must re-draw the map in accordance with the opinion. The new qualifying deadline is February 11, and it remains to be seen whether the legislature will handle the issue in the regular session or hold another special session.

The black-out period for campaign contributions expired last Tuesday, and the qualifying deadline for all non-Congressional elections ended on Friday. You can view the list of Republican candidates here and Democrat candidates here. For a summary article on the statewide offices, click here.

The biggest issue before the Legislature is re-drawing the legislative maps, but with practically an entire session’s worth of legislation remaining to be taken up, legislators are expected to get back to this year’s agenda items as quickly as possible. An early departure still seems to be the goal, which could mean three legislative days in upcoming weeks. This week, Wednesday appears to be a committee day with legislative days on Tuesday and Thursday, but that may change today.