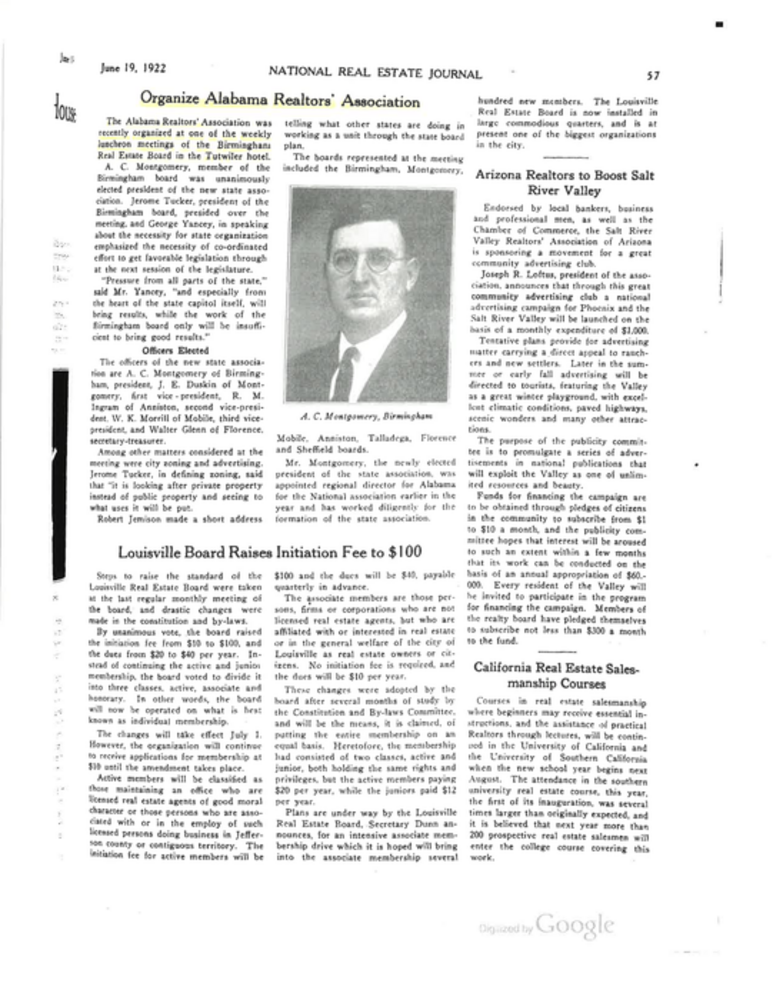 Chartered in 1922, the Alabama Realtors Association, now the Alabama Association of REALTORS®, was organized with a promising future in a decade that began with a roar and ended with a crash.  Often called the Roaring ‘20s or the Jazz Age, America had emerged from World War I ready to rebuild and rejoice.  The decade gave us jazz, movies, personal freedoms – like women’s right to vote -- and increased wealth.  Much of that wealth was invested in real estate and, in 1926, Alabama REALTOR® Robert Jemison became president of the National Association of REALTORS®.

Ownership became a symbol of American pride in the 1920s as people clamored to buy cars, radios, refrigerators and telephones.   Radios became the rage.  The nation’s first commercial radio station signed on in 1920.  Within three years the U.S. boasted more than 500 stations.  By the end of the 1920s, nearly 12 million American homes had a radio for entertainment, according to History.com.  But automobiles were the most popular American purchase with cars becoming a necessity by the end of the decade.

Cars offered Americans a freedom to move about and contributed to expansion from cities into suburban and rural areas which were quickly developed in the subdivisions.  Banks fueled development with “shoestring mortgages” that allowed developers to speculate on real estate.  For the first time, says History.com, more Americans lived in cities and their suburbs than on farms and, between 1920 and 1929, the nation’s total wealth doubled.

This period of prosperity removed some economic barriers to owning a home.  “The view of homeownership was shifting to become something anyone could or should strive for,” said Frederik Heller, director of library operations for the National Association of REALTORS®.  In a 2020 article, 100 Years of Home Buying: Comparing 1920s Real Estate Listings to Today’s, Heller said, “Many of the safeguards and processes that we take for granted today didn’t exist in the 1920s housing market.  There was no such thing as a 30-year mortgage, for example, until after the Federal Housing Administration came about in 1934. There were no laws requiring the disclosure of structural issues or other known problems in a house, and buyers generally didn’t have anyone representing them.”

The decade of prosperity came to a screeching halt with the stock market crash in 1929.  The “real estate bubble” – a period of high demand leading to rapid development coupled with cheap money – contributed to the crash as land values first stagnated and then fell, according to economics publication Dollars and Sense.  “Collapsing land values left people suddenly much poorer, so they cut spending. They also defaulted on mortgages, sticking the banks with ‘toxic’ assets: liens on near-worthless property. The struggling banks, in turn, cut off lending even to good customers. Bank runs–panicky depositors withdrawing cash–further crippled the banking system. Between drops in spending and lending, businesses failed, unemployment soared, and prices fell.”  The real estate market wouldn’t fully recover for nearly 20 years.