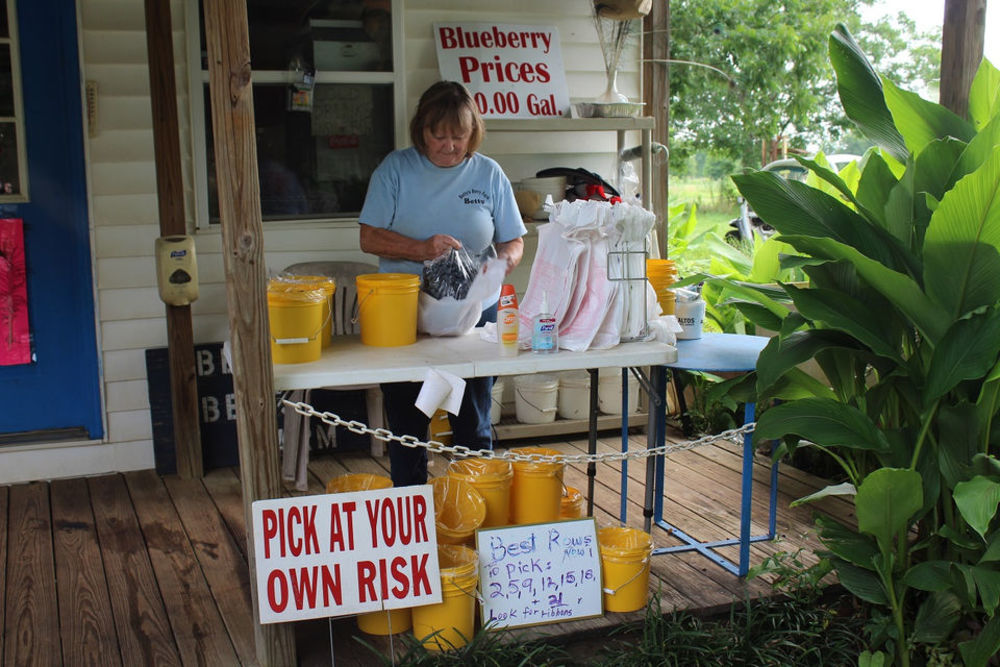 For the past 29 years, Jack, 83 and his wife, Betty, soon to be 80, have operated Betty’s Berry Farm on an idyllic 40 acres of land in Tanner-Williams, on the western edge of Mobile County.

“This is what I do for my golden years,” says Betty.

Next month, they will have been married for 61 years.

Opening the “you-pick” blueberry farm every summer, usually from Memorial Day to the 4th of July, helps keep them busy and healthy, says Betty. She jokes that she once asked Jack’s doctor to please tell him to slow down. “She said no. Let him go as long as possible,” she says with a laugh.

He shows no signs of slowing down, even in the oppressive heat and humidity of June in Mobile. He prefers to show up for work barefooted. “I hate wearing shoes out here,” he says. “I love to walk in the grass.”

The Wilsons don’t have much of a commute. They just walk over from their modest brick ranch house on the property, which Jack inherited from his family. He grew up helping his grandfather on the same land.

Jack remembers being 15 years old when, on the day before his grandfather died, they sat together on the porch and “talked about all kinds of things,” he says. “He and I were real close.” The next morning, he says, his grandfather woke him up and said he needed to go to the hospital.

“The last thing I said was not to worry about the farm, I’d take care of it. And he said, ‘I know you will.'”

Now a grandfather himself, he’s still taking care of the family farm. He keeps about 22 acres mowed, including the pathways between the blueberry bushes.

Last year’s crop was disastrous because the berries didn’t get enough cold weather – they need about 600 hours of cold “to set them good,” Jack says – and Betty was recovering from a broken femur.

But this summer’s harvest has been especially fruitful – “truly a great year, probably the best in about 10 years,” Betty says. “Some years, we have more people come out here than berries. This year, there are more berries than people.”

When customers pull up, they’re greeted by Jack or Betty or their 18-year-old grandson, John J. Wilson V, outside the office, a one-room shed with a porch, where they can pick up a bright yellow plastic bucket that holds a gallon of berries for $10. Next, they board a golf cart where they’re taken down the long rows to the sweetest and most plentiful bushes.

The 7-1/2-acre farm has some 5,000 bushes, with 10 varieties of blueberries. And Jack and Betty say they never get tired of eating them. They freeze 200 pounds each season and eat them every day of the year. Betty puts them in her oatmeal. Jack loves them in pound cake. Need blueberry recipes? They’re happy to oblige.

They enjoy seeing the same customers return year after year. “They’re the reason we stay in business,” Betty says, showing a sweet thank-you note from a grandmother who spent a treasured morning picking berries with her granddaughter. She also receives gifts from customers, like a needlepoint dishtowel and a child’s drawing done in crayon, and proudly displays them in the farm’s cozy office that mercifully has a window unit and a refrigerator with cold drinks.

“It’s an outing,” she says of her customers’ experience, usually driving from Mobile or farther locales and spending an hour or more picking blueberries either early in the morning or late in the afternoon. Recently, a woman and two teenagers picked 10 gallons in the rain. A Mobile ophthalmologist doesn’t bother with the gallon buckets when he picks. He fills up a plastic garbage bag so he can give blueberries to his patients.

The Wilsons are starting to see the second and third generations of families coming back each summer.

“We just enjoy it,” says Jack. “These people get to be part of your family.”

The couple met when Jack was working for a cousin in Long Island, N.Y., Betty’s hometown. After they married, Jack worked in chemical sales and they “moved everywhere,” she says. They were living in Little Rock, Ark., when Jack asked her what she thought of moving to Alabama.

“I thought, this is heaven, really,” she says. Not only did she relish the idea of having her husband at home instead of traveling so much, she also thought she could have all the animals she wanted – and she did.

They moved here with all of Jack’s toys, including an airplane and a boat. He also has a building filled with antique cars. “There’s never a dull moment being married to this man,” Betty says.

Back in 1989, they were trying to decide what they might do when they eventually retired. They thought about pecan trees, but those take 10 years to mature. So they decided to plant blueberry bushes. At the time, blueberries weren’t as popular as they are now. They weren’t yet known as a “superfood.”

“This was relatively new when we got into it,” says Jack. He also grew hydroponic tomatoes until Hurricane Katrina destroyed his greenhouse.

“He always liked to grow things,” Betty says of her husband, who has served on the board of both the county and state Small Fruit and Vegetable Growers Association. He helped many of his competitors start their own farms.

Last year, Jack finally got around to planting those pecan trees. While he says it’s for the next generations, who knows? He and Betty are likely to be out there, selling pecans along with blueberries in their 90s.