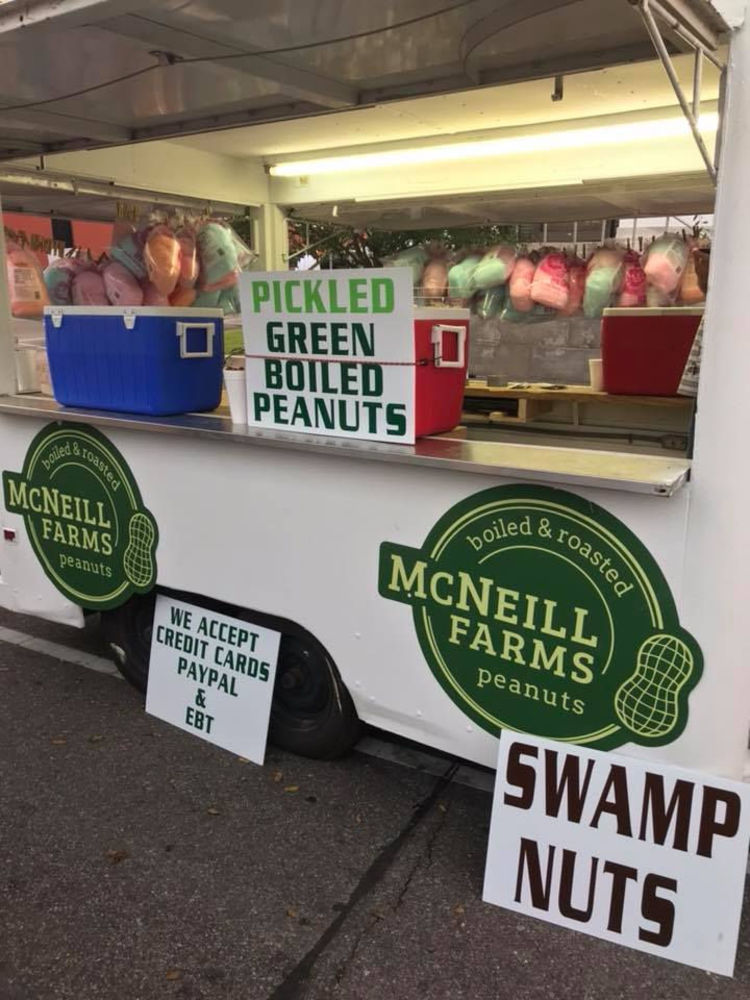 When Jay Marchman was a student at the University of Alabama, the Dothan native would bring bags of boiled peanuts from McNeill Farms back to Tuscaloosa with him. He had grown up eating the delicacies and assumed his friends liked them, too.

"It was like pulling teeth to get people to eat them," he says.

Little did he know, as a business major, that one day he would return to his hometown - known as the peanut capital of the world - and the couple who ran the farm that produced those delicious boiled peanuts would sell it to him. The McNeills had established the farm in 1992 and had run it for 25 years when they asked him if he might be interested in taking over so they could retire. That was five years ago.

"I've been eating these peanuts from these folks since I was a kid," he says. And now he's teaching his daughters, Frances, 4, and Maryn, 3, how to eat them.

Boiled peanuts, which are actually not considered a nut at all but a pea variety, are even popular with the hipster crowd. Paramount, a popular eatery at the corner of 20th Street and 2nd Avenue North in Birmingham, offers an Alabama Hummus appetizer that substitutes boiled peanuts for chickpeas, served with pita bread.

They're often found at less trendy locations like roadside stands and gas stations, as well, and they're a tailgating must-have for many football fans. Best served hot, the shells soften as they're boiled, and the peanuts inside are soft and mushy. The best way to eat them is to bite into the shell, releasing the brine and the pea inside; then throw the shell away.

The taste of fresh boiled peanuts can't compare to that of those warming in a ubiquitous crock pot in a convenience store or, God forbid, sold in a can. When boiled peanuts are made with green peanuts that have recently been extracted from the earth, they become "a whole other animal," Jay says.

McNeill Farms' peanuts are grown on a total of 3,000 acres, mostly in central Florida, where they benefit from an extended growing season. "We get green peanuts before anyone else," he says, so McNeill has the first and last peanuts every year, all hand-picked in the fields, then de-stemmed, washed and packed. Each Wednesday from the first of April through Thanksgiving, a refrigerated semi-truck transports bushels of green peanuts to Dothan.

At McNeill Farms' produce stand in Midland City, fresh boiled peanuts and green peanuts for do-it-yourselfers are available six days per week. "We have 12 50-gallon pots we boil them in daily," he says. Baseball parks and football stadiums sell them like crazy during their games. And, on the wholesale side of the business, Jay sells to independent grocers and produce stands.

McNeill Farms is the biggest supplier of boiled peanuts in the Dothan area, Jay says, selling 4,000 pounds per week this time of year and between 7,000 and 10,000 pounds per week in the springtime. Though he has expanded to offer other produce such as zipper peas, butter beans, Slocomb tomatoes and homemade creamed corn, he says peanuts are the staple, making up a solid 75 percent of his business.

And just in case you don't live within driving distance of Dothan but would like to try boiled peanuts from McNeill Farms, they're delivered as far north as Montgomery every Wednesday and shipped all over the country anytime. Jay says he has a large following on the West Coast, where he mails boxes of boiled peanuts packed in dry ice. Boiled peanuts freeze beautifully, he says, and can be thawed and re-heated for that just-scooped flavor.

Most of the time, Jay's peanuts are simply boiled in those large vats of salty water, but on weekends and at special events - like the upcoming 75th annual National Peanut Festival, held in Dothan Nov. 2-11 - he might do batches flavored with Cajun spice or dill pickle flavoring.

"There's technique involved, but no secret ingredient," he says. Well, except for one. "Love," he says.