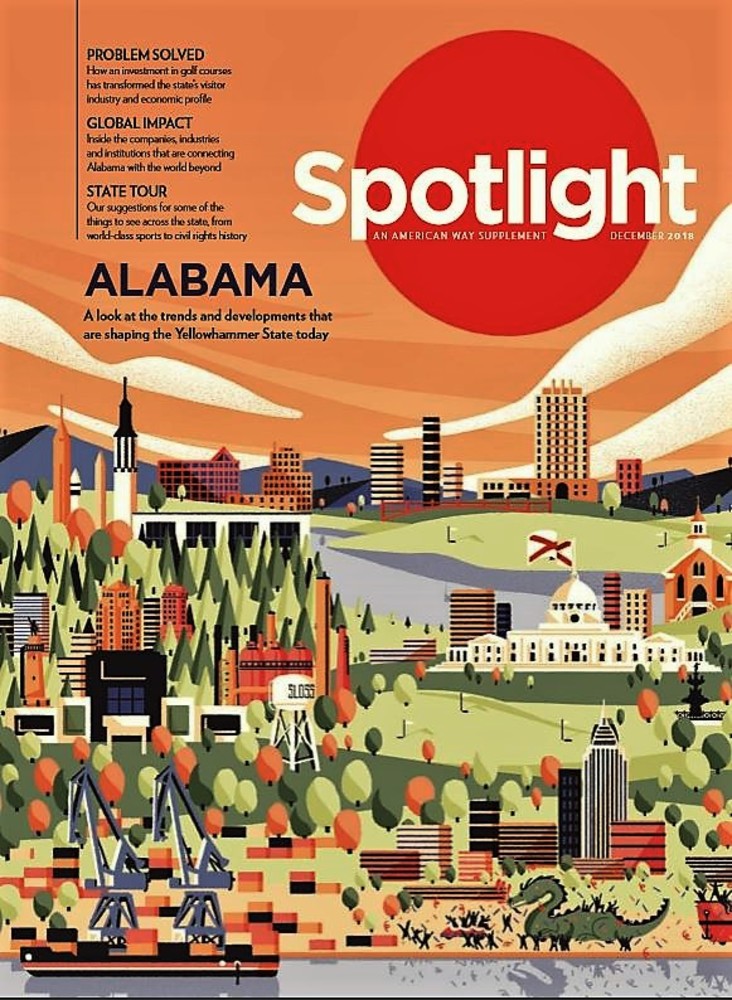 Alabama will be in the ‘Spotlight’ in December, on every American Airlines flight spanning the world.

The Yellowhammer State is the subject of a 40-page, full-color special section – called Spotlight – inside the December issue of the airline’s American Way magazine. The magazine will reside for 31 days, beginning Saturday, in every seat pocket of every plane American and its regional partners fly during December – the busiest travel month of the year. After that, it will be available online.

American Airlines Group (AAG) averages nearly 6,700 flights daily to 350 destinations in 50 countries, the airline reports on its corporate website.  It’s the world’s largest airline based on number of aircraft and passengers served, according to the online site Airport Technology. Nearly 200 million passengers traveled on American in 2017.

The Spotlight special section examines the state with a focus on economic development and innovation. It highlights business and education “Trailblazers,” the state’s research and educational institutions, and examines workforce development efforts. One article probes Alabama’s global impact, highlighting foreign investment in the state in industries such as automotive and aerospace. The state’s growing tech and startup sectors also are examined, with attention paid to companies such as Birmingham’s Shipt. A number of innovative projects underway across the state also get mentions, such as the design and management of NASA’s new Space Launch System at the Marshall Space Flight Center in Huntsville, and the Smart Neighborhood project in Hoover, built in partnership with Alabama Power and other companies.

“At a time when there is so much positive momentum in Alabama, this special supplement offered a perfect opportunity to reach a large audience with stories of excellence from across the state,” said Steve Spencer, president of the Economic Development Partnership of Alabama, which assisted with connections to business and industry across the state for the project. “Passengers on American Airlines’ flights in the month of December are going to be impressed, and probably a little surprised, to learn about the exciting developments in Alabama’s economy, as well as all that the state offers as a quality place to live, work and play.”

The state’s hot spots for visitors also are covered, with writeups about the state’s largest cities, its historic sites and natural wonders, and unique attractions, including the Robert Trent Jones Golf Trail and Gulf Coast beaches. Birmingham’s culinary scene also gets a nod, with an interview of famed chef Frank Stitt, whose Highlands Bar & Grill was named the nation’s most outstanding restaurant this year by the James Beard Foundation.

American Way readers offer an enticing demographic. More than 86 percent are college educated, and readers boast a median household income of $114,200, according to the magazine.

As for the cover of the special section, it features a lively graphic blending sites from across Alabama, from the state Capitol, to Huntsville’s U.S. Space and Rocket Center, to Mobile’s downtown skyline, to Birmingham’s iconic statue of Vulcan.

State Commerce Secretary Greg Canfield offers a glowing vision for the state’s future to close out the glossy special section: “We want Alabama to be seen as a place where there are no obstacles blocking the path to success and a state where the odds aren’t stacked against dreamers.”