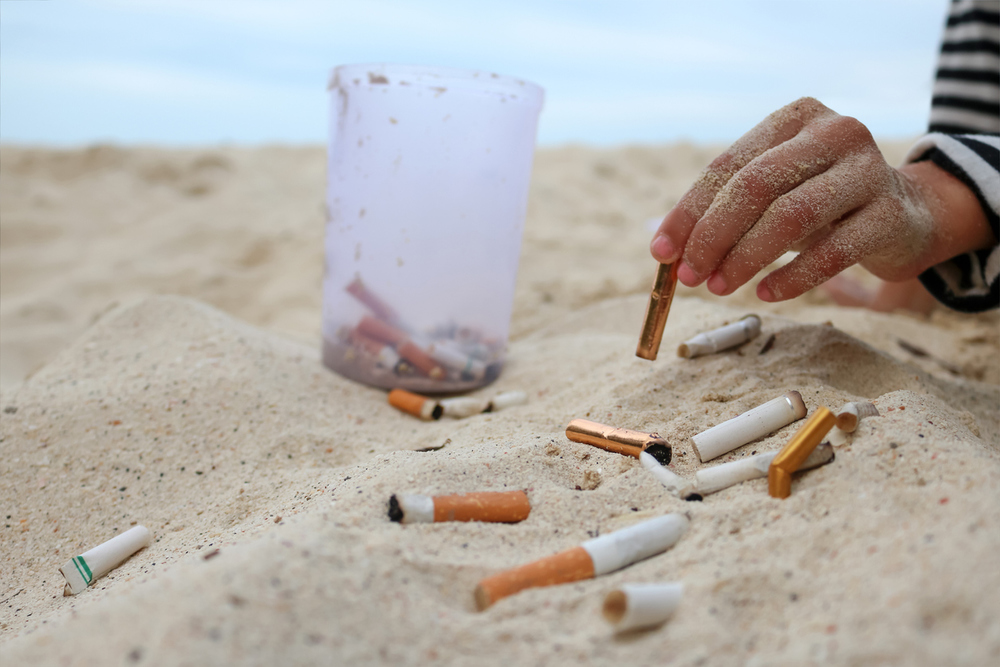 The beachfront is also undergoing $15 million in renovations and city officials want to keep it looking nice. In June, city officials adopted a new wide-ranging list of regulations that included an Alabama first: The public beachfront became smoke free.

The ban is part of a national trend. From the beachfronts of New Jersey to Florida, politicians are looking to snuff out the butts in an effort to lure in tourists and keep these popular tourist attractions from looking like ashtrays.

In New Jersey, a new law goes into effect on January 16 banning any kind of tobacco use on beaches or boardwalks and offenders can be fined up to $1,000. Florida’s legislation doesn’t carry the stiff penalties, but it does implement a wide-ranging ban on smoking at any public beach.

“What Florida is doing is not surprising,” said Grant Brown, recreation and cultural affairs director with the city of Gulf Shores, comparing smoking bans on beaches with restrictions to smoking at outdoor athletic stadiums.

“It’s similar … where people are not being allowed to smoke inside the stadiums,” said Brown. “It affects (a spectators) opportunity to enjoy themselves. It’s similar to that at a public beach.”

The Gulf Shores ordinance represented the first time an Alabama governing body adopted a smoking ban to also include e-cigarettes, anywhere along a beachfront. Alabama is home to 52 miles of beaches, which includes state property and Mobile and Baldwin counties.

Dauphin Island, Orange Beach and Gulf Shores have jurisdiction over the most popular public beach spots that fuel a significant chunk of Alabama’s $14.3 billion tourism industry.

The Gulf Shores enforcement comes as cities across Alabama continue to take up smoking bans even as the state has refused to act. Alabama is one of a dozen states left in the U.S., which have not implemented a statewide ban on indoor smoking. The lack of a ban is one of the reasons why the state routinely receives “F” grades in annual American Lung Association assessments.

Ashley Lyerly, director of advocacy for the American Lung Association in Birmingham, said the trend in Alabama is for cities to institute ordinances which place restrictions on where people can smoke. Thirty-five cities have voted to support indoor smoking restrictions at all businesses including bars and restaurants. Orange Beach and Gulf Shores both approved their ordinances in 2007. Dauphin Island does not have an ordinance in effect.

The approval of ordinances often puts local city officials in difficult situations with their constituents. That was the case in October, when the North Alabama city of Sheffield adopted a smoking ban prompting howls from restauranteurs and calls from smokers for a citywide boycott.

“From the Lung Association’s perspective, we’ve been focused on indoor and public spaces and there is an interest in eliminating exposure to second-hand smoke in outdoor places like stadiums and places where a large number of individuals congregate to remove the social norm of smoking,” said Lyerly.

Alabama beach cities are keeping an eye on the Florida measure, with an interest in possibly following suit. Florida has had statewide indoor smoking ban in place 2003. Bars are exempt.

“We’ll be curious to see how Florida proceeds,” said Phillip West, coastal resource director with the city of Orange Beach. “If it passes, we’ll be interested in how they enforce it and what kind of push back they might get.”

Said Dauphin Island Mayor Jeff Collier: “I am aware of what’s being pursued in Florida and (a beach smoking ban) has come up before in the past. But there have been no heavy conversations about it.”

Florida lawmakers could consider this spring legislation that would criminalize smoking on public beaches, levying $25 fines on offenders or up to 10 hours of community service.

The Republican state senator who is sponsoring the legislation claims that beaches where smoking is allowed are not rated as highly in closely watched rankings of the nation’s best beaches, according to a Sarasota Herald-Tribune story.

In Gulf Shores and Orange Beach, both cities are now three years into the “Leave Only Footprints” campaign which advocates against beach litter – among other things – in an effort to keep the beaches clean.

“We sift the sands and get quite a few cigarette butts as we clean the beaches,” he said.

Enforcement of the June ordinance in Gulf Shores is not rigorous, Brown said, though fines are stiff: Violators could potentially face a fine of “not more than $500” or jail time.

The smoke free public beach is part of an ordinance that also bans pets, fireworks, alcoholic beverages, open fires, drones, and laser pointers. On Wednesday, the city sent out a news release reminding visitors that dogs are banned from the public beach, though the city’s ordinance makes exceptions for service animals.

The police “won’t be down there writing tickets,” Brown said. But signage is in the works alerting beach visitors about the smoking ban.

“The goal is not to have the beach turned into an ash tray,” said Brown.

In Orange Beach, West said that some condominium owners have polices in place for their properties which abut the beaches. He said that some locations ban smoking on their own grounds and near swimming pools.

The city manages most of the beaches within its jurisdiction, even though access is through privately-owned condos and not via a public beach.

Said West: “I supposed, if the city wanted to ban it on the beach, we could. We manage the beaches. It is a problem and it’s a very difficult thing to clean up. Our crews typically work after dark and if even if they could see well enough to identify and collect the cigarette butts, it would take forever.”

He said, “When you are walking the shorelines, the most obnoxious items are cigarette butts, plastic drinking bottle caps and broken up Styrofoam, especially from coolers. All that stuff breaks down in such a way that you cannot collect it.”

“I really don’t want to see government getting involved in any personal issues unless absolutely drug into it because of a public safety issue,” said Kennon. “I don’t see any issue with smoking on the beaches here. I don’t even know if it’s a perceived problem here. I think we would stay out of it.”

Collier, of Dauphin Island, said the only beach smoking ban in place is during the city’s “sunset concerts,” which occurred between Memorial and Labor days.

“We recognized that secondhand smoke is an issue, and we don’t play that lightly so we did incorporate in a smoking section for attendees at those events and it’s worked out well,” said Collier.

Dauphin Island, the state’s only barrier island with seven miles of beachfront accessible to the public, does not enforce cigarette smoking during other occasions.

“Can you imagine patrolling that?” Collier said. “We routinely get criticized for having rules that ‘we don’t enforce.’ If you put a rule on the books and people expect you to enforce it, you need to solve that issue first. I view that as being problematic at best. You’d have to put a number of people on vehicles and patrolling and we would have an obligation to react to that so I just think that I a problem I wouldn’t want to get involved with right now. Maybe someday we’ll have to."