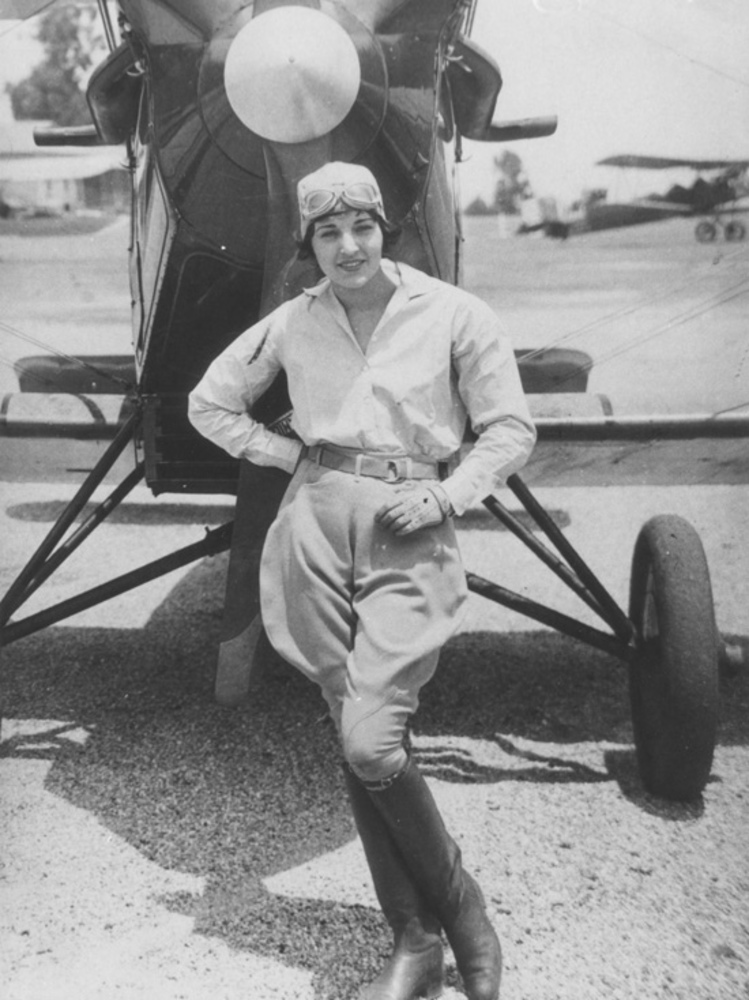 In 1927, before anyone had even heard the name Amelia Earhart, Ruth Elder from Anniston, Alabama, attempted to fly across the Atlantic Ocean. The first woman to try the feat, Elder went on to become a Hollywood starlet, while Earhart became an aviation legend and the subject of unending lore.

“If Ruth had made it across the ocean in 1927, it would have changed everything. Amelia Earhart might not have even attempted the flight,” says author Keith O’Brien, whose new book Fly Girls: How Five Daring Women Defied All Odds and Made Aviation History shares the heroic sagas of early aviators, including Elder and Earhart, who pointed the way for female pilots.

Earhart, after being plucked from her job as a social worker in Boston and put into a cockpit as a marketing scheme soon after Elder’s attempted flight, did, of course, eventually become the first woman to successfully cross the Atlantic in 1932, and disappeared during an around-the-world flight in 1937.

But this story starts a decade earlier.

“In 1927, Ruth Elder was the most famous female aviator in the world,” O’Brien says, “and arguably one of the most famous women of her time, period.” Born in Anniston, Alabama, Elder worked briefly at a department store in Birmingham and then got married and moved to Lakeland, Florida, where she took a job in a dentist’s office.

Swept up in the fever and glamour of air travel in the 1920s—the era when Charles Lindbergh was breaking aviation records—Elder and her husband became interested in flying. She took lessons and some of her husband’s business friends wanted to record film of her in a plane and sell it to Hollywood. She cut a striking image, with her curly brown bobbed hair pulled back into a colorful scarf. “Elder figured,” O’Brien says, “it was better than playing out her years working at a dentist’s office in Florida and making dinner for her husband.”

With two years of regional flights under her belt, Elder announced plans to be the first woman to fly across the Atlantic Ocean (with the help of the pilot who trained her, Captain George Haldeman.) When she went to New York City to begin the trip to Paris, the press mobbed her. The twenty-four-year-old was a media natural. “Gas bought, runway ready, plane dandy, pilots okay,” she told reporters. “I’ve never been to Europe. Might as well go this way. Get some clothes. Doll up a little. Come back by boat, taking it easy.”

She was more than a pretty face—she knew how to handle an aircraft. Her bright orange single-engine plane’s name was emblazoned in cursive script: American Girl. The day of the flight, a crew loaded the monoplane with gas, an emergency radio, a basket of food—sandwiches, chocolate bars, dill pickles, soup broth, and two quarts of coffee—and rubber suits meant to keep the pilots afloat in case of a water landing.

As land fell away behind the American Girl, Elder and Haldeman took turns at the controls and Elder made up lyrics to a popular tune: “I’m on my way to gay Par-ee.” But fifteen hours into the flight and less than halfway there, trouble began. The plane’s engine struggled, ice formed on the wings, and the oil pressure dropped. Eight hours away from Europe in the middle of the ocean near Portugal’s Azores islands, they had to ditch the plane into the sea alongside an oil tanker. The ship’s crew pulled Elder and Haldeman aboard as they all watched the American Girlburst into flames and sink beneath the waves.

News traveled fast and by the time Elder reached European soil, she was an even bigger celebrity. Her 2,623 miles airborne was the longest flight ever by a woman. When she returned to the United States by ocean liner two weeks later, President Calvin Coolidge greeted her in Washington, D.C. Folks back in Anniston, Alabama, invited her home for “Ruth Elder Day,” lining the streets for a parade and serving white cakes with red icing letters spelling out R-U-T-H.

Soon Hollywood producers and vaudeville shows came calling. Ruth appeared in a handful of films, the most popular being 1928’s Moran of the Marines. She did take part in a few air races throughout her life, was considered a colleague of Earhart’s, and never forgot her love of flying.

“I hope that Ruth Elder will be remembered for her bold and daring spirit,” O’Brien says, “And for the confidence it took not only to make that flight, but to graciously put up with all the pressures and expectations she faced in 1927.”

Elder died in her sleep in 1977 in San Francisco. She left specific directions to her husband on how to handle her remains: “Ruth Elder wished to be cremated,” O’Brien writes, “and have her ashes scattered from an airplane into the sea.”