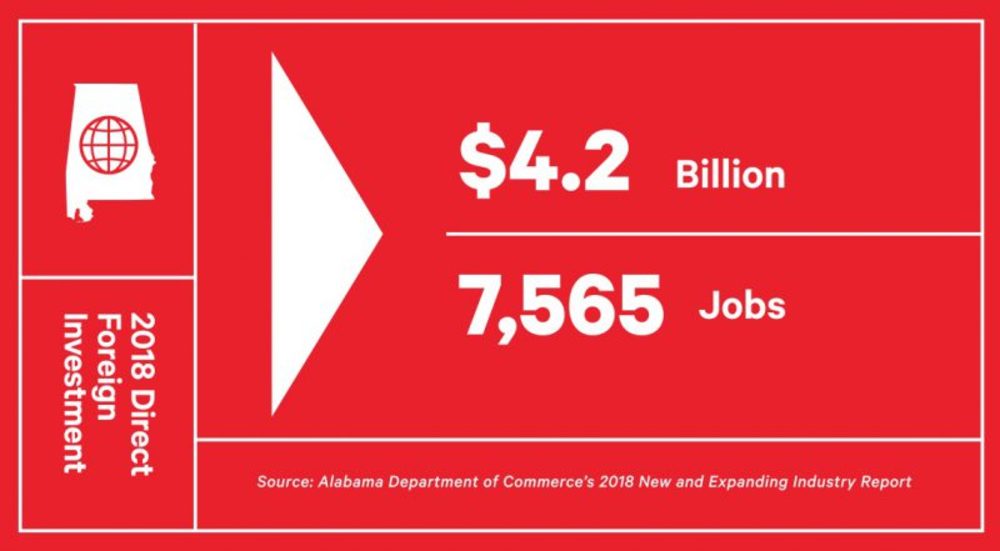 Last year, companies from 16 different countries launched projects with more than 7,500 new jobs. So far in 2019, FDI projects approaching $1 billion in value will bring another 3,300 jobs to the state, according to an Alabama Department of Commerce estimate.

HSAA, which launched its Alabama operation in 2003 with 20 employees, will have nearly 600 when the new hires are added, said Jonathan Tullos, Executive Director of the Wiregrass Economic Development Corp. Its last major expansion in Enterprise came in 2015.

HSAA, which produces weather-stripping and air conditioner hoses, serves Hyundai’s Montgomery assembly plant, along with Kia, Chrysler and General Motors. Its Alabama-made products are found in more than a dozen automobiles.

“Having a company like HSAA make an investment in Enterprise is a ringing endorsement of the quality of workforce and opportunities that exist in our area,” Tullos said.

“We have seen in the past that these investments can yield additional job-creation opportunities from other companies looking for a home.”

One example: Advanced Carrier Products, whose parent company is based in Germany, opened a manufacturing operation in Enterprise to supply metal inserts to HSAA.

Similar stories have played out in a number of Alabama communities in recent years, particularly as growth in the state’s auto industry has intensified.

Select USA, a federal government program that facilitates foreign investment in the U.S., says the Alabama operations of foreign-owned companies employ 109,000 people in the state. Read a report.

Since 2013, FDI projects in Alabama have involved nearly $13 billion in new capital investment, generating almost 25,000 jobs, according to estimates from the Alabama Department of Commerce.

FDI typically accounts for 30 to 50 percent of new and expanding industry activity in the state each year, said Greg Canfield, secretary of the Alabama Department of Commerce.

“Clearly, this is a huge priority for us as a state, and we’re fortunate to have a diverse base of industries, along with a highly-skilled workforce, to attract and retain these commitments from global manufacturers year after year,” Secretary Canfield said.

Not all FDI flowing into Alabama is tied to the auto industry.

In fact, foreign investment recorded in 2018 originated from a diverse slate of sources in a variety of industries.

Other big projects were Haier U.S. Appliance Solutions Inc., part of a China-based conglomerate and parent company of GE Appliance, which announced a $115 million, 255-job expansion of its Decatur refrigerator plant.

Alabama has seen significant increases in FDI in the automotive sector over the past 25 years, thanks to the growing operations of foreign automakers Mercedes-Benz, Honda and Hyundai, and their sprawling supplier networks.

Toyota has also played a major role. Earlier this year, Toyota announced a $288 million expansion at its Huntsville engine plant, where it will add two new production lines and 450 workers. The project will push the investment in the plant to $1.2 billion and its workforce for more than 1,800.

Meanwhile, just miles away, construction on the $1.6 billion Mazda Toyota Manufacturing USA joint venture auto assembly plant is well under way. After production begins in 2021, the facility will have up to 4,000 workers.

Already, suppliers have begun circling the plant, bringing $380 million in new investment and nearly 1,500 jobs. More announcements are expected in 2019.

For Alabama, 2018 was a banner year for automotive FDI.

In addition to the new Mazda Toyota factory, other major projects included Mercedes-Benz’s new $268 million, 325-job EV battery plant in Bibb County, along with a $495.5 million expansion at the automaker’s Tuscaloosa County campus.

Elsewhere in the auto industry, Hyundai constructed a $388 million facility for engine manufacturing operations in Montgomery, and Honda announced plans to spend $55 million to improve weld operations and add more than 50,000 square feet at its Talladega County factory.

Like other areas of the state, Tullos said Enterprise and Coffee County are making moves to position their region for future investment opportunities by focusing on education and workforce development.

“Our workforce is anchored by one of the best K-12 school systems in the state of Alabama as well as the efforts of Enterprise State Community College President Matt Rodgers, who recently launched a mechatronics program to support companies like HSAA,” he said.

The mechatronics program, offered at the Alabama Aviation College in Ozark beginning this fall, will train workers for high-demand industrial automation careers that focus on electrical, mechanical and computer engineering.

There are similar programs in place to assist Mercedes and Toyota. In addition, Alabama has rolled out initiatives including Success Plus and Apprenticeship Alabama that are designed to fill the pipeline of skilled workers needed in the future.