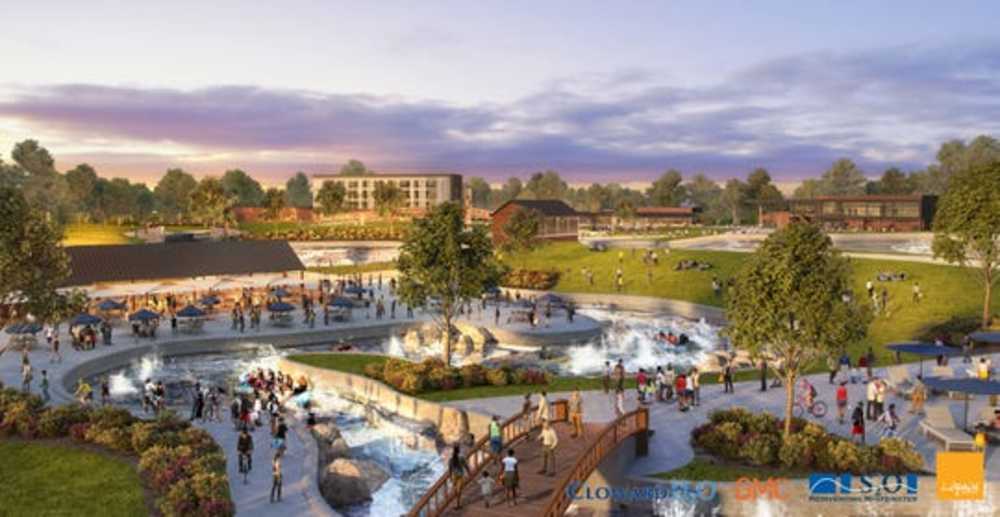 A $50 million, government-backed whitewater park and outdoor fun center is about to start construction on the outskirts of downtown Montgomery, and it’s a project that local officials are betting will redefine the area as a young professional and family destination.

The main attraction is a 25-acre central park that will feature rafting and kayaking along a man-made whitewater course that twists through restaurants, shops, a beer garden, an outdoor concert venue and a hotel and conference center. But the wider, 120-acre site will feature a climbing tower, zip lines, mountain biking, rope courses and more.

"This facility is going to be bigger and better than anything folks around here have ever seen," Montgomery County Commission Vice-Chair Ronda Walker said.

Officials say the initial footprint is just a start because it's expected to inspire growth across the area over time. Core attractions will stretch all the way to the Alabama River, though the park will not use any river water for its whitewater course.

The planned Montgomery site is off Maxwell Boulevard, sandwiched between Interstate 65, west of the highway adjacent to Maxwell Air Force Base. It's an exit that’s been little more than a pit stop for beachgoers, even as the city’s revitalized downtown exploded with growth a few blocks away.

Two entrances are being planned on either side of the historic Chappell House, an 1854 cottage that's on the National Register of Historic Places. There are plans to restore that cottage and incorporate it into the park's administrative functions, part of a wave of changes expected to sweep through the area in the years ahead.

Montgomery County Commission Chairman Elton Dean said it will push that redevelopment into west Montgomery and could touch off commercial projects all the way to the South Boulevard exit. "Just imagine what we’re about to see and what we’re about to see on the west side," Dean said. "… I always talk about the one big house. Well, this bedroom is about to get what we need. It’s the shot in the arm we’ve always needed to have."

The park is happening thanks to a pool of public and private funding poured into a cooperative district controlled by Montgomery County, which is pumping about $35 million into the project. The city is contributing about $16 million worth of land. The city has long owned most of the land and bought the last handful of homes on the site over the last few years. The last private resident will leave by Sept. 1.

Montgomery Mayor Todd Strange said the city is still negotiating with the Salvation Army for the purchase of its property on the outskirts of the park site. He said those conversations have been "productive" and he expects to reach a deal within weeks. "If you’ve been to the Salvation Army you know they need a new facility," he said. "Where they locate will be up to them. Our conversation centers around value and what it is that we can contribute to them to help them move that."

They expect the deals to pay off. Assuming just 64,000 out-of-town visitors a year, roughly the financial break-even point for the park, economist Keivan Deravi estimates an annual impact of $6 million. Deravi said those figures don't include use by what he calls "hardcore" whitewater enthusiasts, or anyone who lives close enough to drive here.

"Then you get into incidental tourists. That’s where the money is," he said.

The Montgomery Zoo draws about 200,000 visitors a year. The whitewater park's backers estimate total annual attendance at almost 300,000, and its projected impact skyrockets if it approaches that level of activity.

New whitewater park will be similar to Charlotte Olympic facility.

A similar park was built in 2006 in Charlotte, North Carolina, using a similar approach and some of the same team members as the Montgomery park. Called the U.S. National Whitewater Center, that North Carolina facility now stretches over 1,300 acres and rakes in more than $22 million a year, according to a study by engineering company S20 Design. It's about a 45-minute drive from downtown but still creates an estimated $37 million annual impact and supports 700 jobs.

The Montgomery plan has been in the works for years under the code name “project catalyst” with the idea that it will kick off a new wave of expansion for the area, and for the city as a whole. “You don’t want to do a project that’s one and done,” McNair said.

They expect more private investment to follow, stretching into one of the poorest areas of Montgomery and connecting it to downtown’s thriving convention and tourism business. Development officials compared it to the arrival of Riverwalk Stadium and the Montgomery Biscuits, which touched off a burst of new hotels, restaurants and entertainment nearby.

They say this project has other potential benefits. For instance, Montgomery's first responders currently travel to Colorado for swift water rescue training. Once the park is open, they can save on travel and do it here — and first responders from across the nation can train in Montgomery, as well.

Officials also expect it to improve the quality of life here in a way that will make it easier to recruit employers and young talent.

Walker said the deal took years to develop because government officials wanted to be sure it was a worthy investment. Now that the word is out, she expects a wave of excitement to push it along faster.

Construction is expected to start this fall, with a targeted opening of spring 2022.