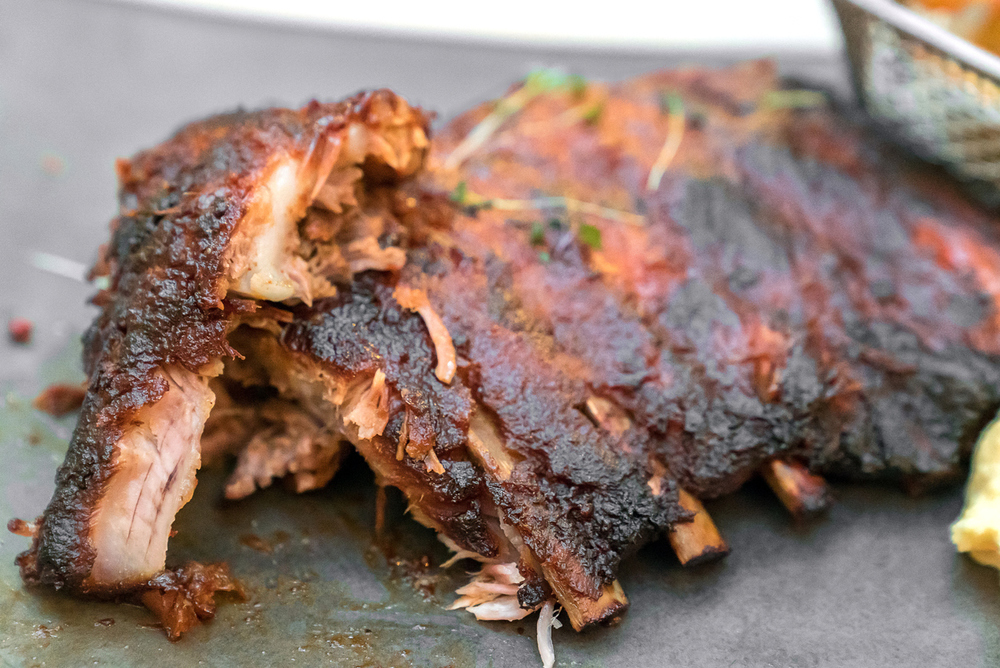 Earlier this summer, as I was revisiting restaurants for Southern Living’s soon-to-be-released 2019 list of the Top 50 BBQ Joints in the South, my travels took me through central Alabama, a region that I like to call “Rib Country.”

The rib game is strong in these parts—so strong, in fact, that it’s made me reluctant to order ribs anywhere else in the South. We’re not talking stubby little baby backs or neatly-trimmed St. Louis cuts. The old school Alabama joints go with big, meaty slabs of spare ribs, and they serve them in their own unique but delicious way.

At Archibald Drive Inn in Northport, just over the river from Tuscaloosa, the ribs plates are assembled upside down: a white styrofoam plate is covered with a sheet of waxed paper, then a pool of thin orange sauce, then the ribs, and finally a couple of slices of white bread fanned out over the top, as if to hide all the deliciousness from prying eyes.

Slide the bread to the side, flip the ribs over so the meaty side is on top, and take a bite. The rich, smoky pork is as crisp as bacon on the outside and perfectly chewy underneath. Its short bath in the orange-hued sauce adds a delightful dose of vinegar and pepper. You’ll gnaw every last scrap off the bones and from around the nubby cartilage on the tips.

It’s a short dash from Archibald’s to the original Dreamland Bar-B-Que, just south of Tuscaloosa. You get there by driving down the wonderfully-named Jug Factory Road. At Dreamland, the ribs are served right-side up with the sauce on top, but they’re very similar in style to Archibald’s.

Whoever coined the term “fall off the bone” to describe good ribs never visited Dreamland. These are ribs you have to chew, and chewing has never been more enjoyable. The long strips of pork have wonderfully crisp bits of char around the edges. They’re enrobed in a dark yellow sauce that’s sharp with mustard but still slightly sweet, with just the right level of peppery heat to leave your lips tingling.

Further east in Bessemer, the sauce at Bob Sykes Bar-B-Q is quite different—thicker and redder with more tomato and less heat—but the ribs have the same great slightly-charred flavor and chewy texture as Dreamland’s and Archibald’s.

How do they do it, these Alabama rib kings? You can pick up some clues while waiting to order at Bob Sykes, for their main brick pit is on full display just to the right of the counter.

You don’t see pits like that in too many places. Down in Texas, barbecue is typically cooked on offset smokers, which have a firebox on one end and a smokestack at the other. The arrangement draws hot air and smoke across the meat but doesn’t expose it to direct radiant heat.

It’s just the opposite in much of the Carolinas, where pitmasters burn wood down to coals in external chimneys or burn barrels and shovel the glowing embers into the bottom of their pits. The meat cooks over direct heat but without any flames and only a modest amount of smoke.

At Archibald’s, Dreamland, and Bob Sykes (and at many others Alabama joints), they combine direct heat cooking with plenty of fire and smoke. Their custom-built brick pits have a broad metal grate that sits directly above the fire box, and the coals are continually refreshed with split hickory logs, so there’s always a little flame in the mix. You don’t get those beguiling little bits of char any other way.

No fancy spice rubs adorn the meat, just a generous sprinkling of salt to accent the distinctively rich, sweet flavor of hickory smoke. Alabama cooks don’t cotton to the philosophy of low-and-slow, either. Theirs is an active form of cookery, with dozens of racks of ribs crowding the grates, the pit men using long forks to flip and turn the slabs and move them around the pit.

In a Texas-style offset smoker, it can take six hours or more to finish a rack of ribs. On the brick pits at Dreamland, they’re done in an hour or less. (Curiously, in various interviews the pitmasters at both Dreamland and Archibald’s have described their method as “being patient” and “keeping it low”. One wonders what the inferno would look like if they were in a hurry.)

The next time I’m craving a big slab of ribs, I’m not messing around with secret dry rubs or “low-and-slow” commandments. I’m pointing my car west on I-20 and heading straight for Rib Country.