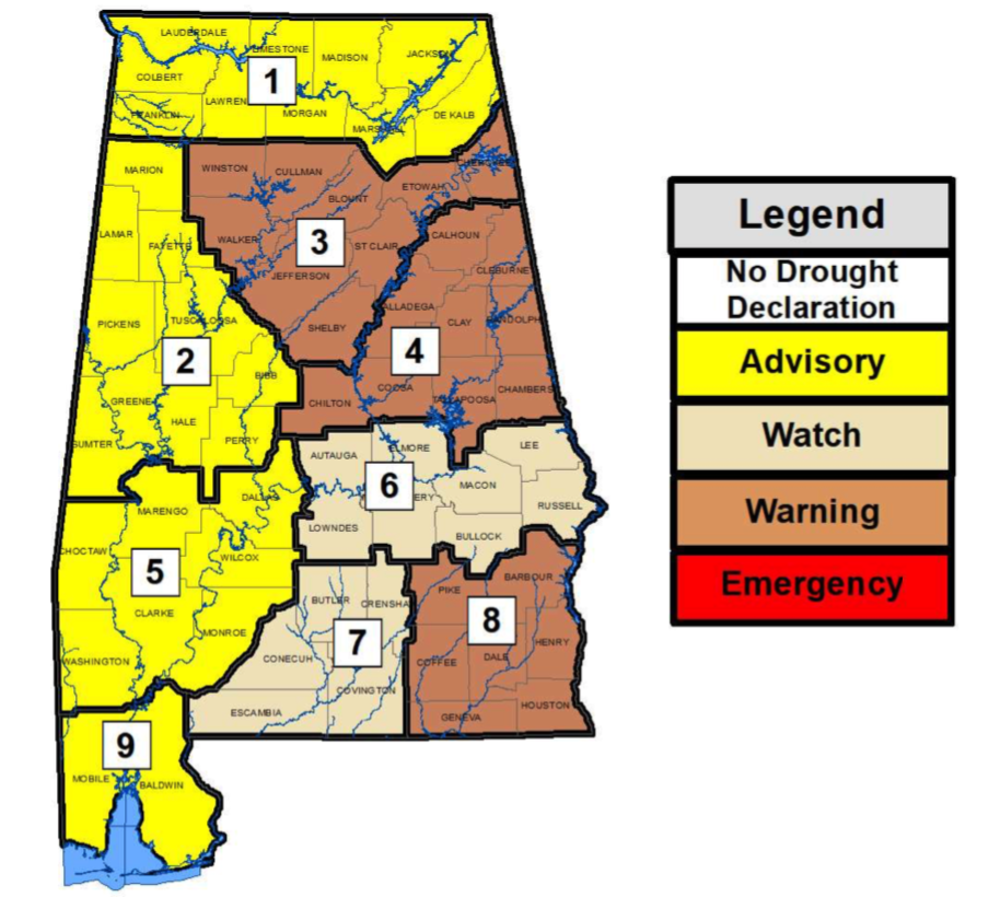 Alabama is in the midst of ongoing drought conditions. Drought can directly impact the real estate industry in a number of ways, such as increased risk of wildfire, increased susceptibility of trees to pine beetles and other insects, lost or damaged crops, and less feed for cattle, to name a few.

On September 25, your public policy team attended a meeting of the Alabama Drought Monitoring and Impact Group (MIG). The MIG is a statutorily created sub-committee of a larger group, the Alabama Drought Assessment and Planning Team (ADAPT). MIG is tasked with coordinating updates from various stakeholders related to drought and reporting to ADAPT, while ADAPT advises the Governor on drought conditions and recommends actions to mitigate a drought’s effects.

Those present at the MIG meeting included the State Climatologist Dr. John Christy, representatives from various state agencies including the Alabama Department of Environmental Management (ADEM), the Office of Water Resources (OWR), the Department of Conservation and Natural Resources (DCNR), Ag. and Industries, the Emergency Management Agency (EMA), Geological Survey of Alabama (GSA), as well as representatives from Alabama Power, TVA, USGS, the U.S. Corps of Engineers, and the Weather Service, among others.

At the meeting, many of the groups provided updates from across the state on various topics related to water, including ground temperatures, releases at dams, data from stream-flows and measures of groundwater from wells.

The drought conditions have particularly affected cattle farmers. While this time of year is typically drier in Alabama, above average temperatures have caused pastures to dry up, preventing third cuttings of hay and causing cattle owners to delve into winter hay supplies. To connect farmers in need of hay with hay sellers, the Alabama Department of Ag. and Industries hosts a hay listing website that can be found here. Due to the drought, the USDA has issued primary disaster designations for Dale, Geneva, Henry and Barbour counties. Famers in these four and contiguous counties of Covington, Houston, Russell and Pike may be eligible for emergency loans through the USDA Farm Serve Agency. See the disaster publications here and here.

Finally, the group also discussed the most recent fire declaration by the Alabama Forestry Commission (AFC). Earlier on September 25, the AFC issued a statewide Fire Alert, placing strict restrictions on burning in an effort to prevent wildfires. The Alert notes that, as of September 25, AFC wildland firefighters had responded to 182 wildfires across Alabama, burning approximately 2,608 acres. For more information, you can read the Fire Alert here.

The good news is that the above average rainfall in the spring and early summer allowed water elevations to stay high. Reservoirs typically drop levels this time of year, so drought conditions are not as bad as they could be. To our knowledge, the Governor has not issued any declarations and no water works system has issued restrictions on water use.

The Alabama REALTORS® Public Policy team will continue to monitor the situation.