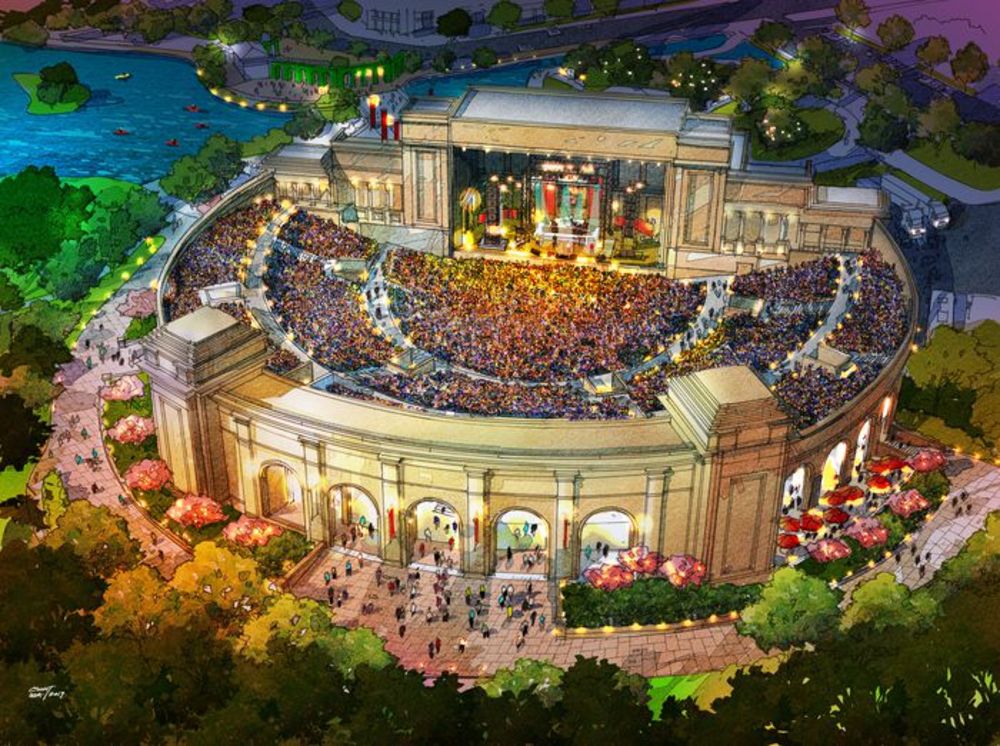 He helped transform St. Augustine Amphitheater from so generic a certain country star once greeted the crowd with “Hello, Jacksonville!”, to a must-do venue for artists and fans.

Now, Ryan Murphy will help run a venue that could change the course of Huntsville’s music history.

And not just a boilerplate "shed" type amphitheater.

"I think Huntsville has the opportunity because of its placement geographically, the swell of community support, the areas it can draw from," Murphy says. "All those elements. It's a really open canvas in a lot of ways, with a ton of potential for people to appreciate and get behind it. It's exciting."

The as yet unnamed Huntsville amphitheater is about 90 percent designed and heading into schematics phase. Features include an all-seating bowl with vertical lift, similar to Red Rocks, instead of a stretched lawn format, to bring fans and bands closer together. The concept involves elevated food and beverage and no seats with obstructed sight lines.

It will be located in a new city park, to be built on the southwest portion of the former Madison Square Mall grounds, on University Drive, behind a TopGolf, Dave & Busters and High Point Climbing & Fitness at the MidCity development here.

But in two or so years Huntsville Venue Group staff believes the amphitheater planned for here will be hosting "festival headliner" type acts.

To casual fans, Lovett is known for his multi-instrument skills on Mumford hits like "The Cave" and "I Will Wait." To industry insiders, he's known for having behind the scenes tentacles in areas like artist development (Gotye, James Bay, Michael Kiwanuka, etc.) and his London venue Omeara, which hosts acts like The Pretenders, Maggie Rogers and Beck.

Having performed at amphitheaters ranging from Washington's Gorge to Pelham's Oak Mountain, Lovett is very familiar with what works. And what doesn't work. From an artist perspective, having dressing rooms and back of house that aren't afterthoughts is essential. "For a touring artist, that's where they spend their lives," Lovett says. "Some places recognize it. And everything from catering facilities to clothes washing facilities to comfort of the furniture is thought about, and some just provide you with a concrete box with strip lighting." Like many musicians, Lovett is as much a fan as an artist. You can hear this in how he gushes about seeing art-rockers Radiohead perform at a Switzerland amphitheater. His Huntsville amphitheater design input draws from as far back as Italy's Arena di Verona - which was built around 2,000 years ago and is still in use, including a Mumford & Sons concert.

With his band, Lovett has sold several million records, won Grammys and toured the world. For the Huntsville project he's done anything but phone it in, having visited the Rocket City around 15 times so far. Lovett and Venue Group became involved around two years ago. Shain Shapiro, of Sound Diplomacy, the consulting firm that conducted a music audit for Huntsville, talked with Lovett, who Shapiro was working with on a London project, about what was happening in Huntsville.

With an anticipated capacity of around 8,000, the Huntsville amphitheater seems like direct competition for Von Braun Center's 7,000-ish current capacity Propst Arena. There will be some of that. But both Murphy and VBC executive director Steve Maples both feel many shows are clearly better suited for either an arena or amphitheater.

“I welcome the amphitheater,” Maples says, “as well as any other new music venues opening in Huntsville. The challenge we have, and the challenge the amphitheater will have, is that Huntsville is a tertiary market which makes it very difficult to compete with larger capacity venues in secondary and primary markets for the top acts.” Since opening in 1975, the Von Braun Center has hosted concerts by greats like Prince, Allman Brothers, Tina Turner and Guns N’ Roses. In January, the VBC will expand its booking options by adding a 1,500-capacticity Mars Music Hall to its existing arena and concert hall.

Murphy says, “I think between the new facility the VBC is opening, the growth there, what we’re doing, all of us together are really putting a major bulls-eye on Huntsville.” Unlike an arena, where curtaining can be used to scale down for certain bookings, an amphitheater needs to be at least 80 percent full to feel right, Murphy says, another factor in determining which venue’s the better fit.

To take the amphitheater from concept into reality, Huntsville Venue Group is leading a team from many disciplines (acousticians, landscape architects, riggers, etc.) from around the world (Washington, D.C., Chicago, Dallas and beyond). Venue Group acousticians have reviewed venue layout and orientation so as to not have sound be a negative impact on MidCity and surrounding businesses and neighborhoods. "Our job is to quarterback that team," Luba says.

Venue Group has taken a significant risk putting the time, energy and costs before final approval. But Murphy says the city’s support of their vision has been reassuring. Murphy and his family moved to Huntsville about six months ago, so he could be HVG’s constant presence here. His office is on the backside of a well-known downtown building, up a flight of metal stairs. On a recent afternoon, he’s wearing jeans, a Sup Pop t-shirt and glasses with see-through frames. A Gainesville/Daytona native, music began changing his life at age five, when he attended a Blondie concert with his dad.

Having Murphy already here before the amphitheater gets built is advantageous in two critical ways. One, HVG is able to give extensive design input and vision. “A lot of times it’s just architects and contractors at the design and build phase,” Murphy says, “leaving out an important voice to the design as it relates to operations. There’s a lot of beautiful looking buildings out there that fall very short in operational flow and efficiency.” Also, being here the two years or so before the amphitheater opens gives Murphy a running start on building awareness within the community, music industry and market. He feels those will be some of the project’s biggest challenges.

“This is another milestone in our ongoing effort to provide more quality of life options for our community,” Huntsville Mayor Tommy Battle says in a statement. “For Huntsville to continue to attract the best and brightest to our city, we’re going to need entertainment options that compete with other cities vying for our talent."

HVG's Luba says, "Huntsville should be really proud of the leaders they've elected. I spend a ton of time around the world where it's less often than you think you run into guys like the mayor and (city administrator) John Hamilton. They truly believe music and communal gathering is key to all sort of good things happening for the city."

As many major tours in recent years have increasingly passed over tertiary markets for larger ones, music fans living in Huntsville, like aerospace facilities manager Steven Larson, often must drive to Nashville, Birmingham or Atlanta to see top concerts. To see a show in Nashville or Birmingham, expenses for Larson to take his wife or a couple of their kids can total several hundred dollars. Or even more money. If the concert’s in Huntsville, his expenses are cut in less than half. “We were looking at tour schedules and it just seems like everybody misses us,” says Larson, a hard-rock and metal fan. “Some people hunt or fish, we go to live shows, that’s our thing.” Before moving to Huntsville from New Orleans in 2018, the Larson family attended around 15 concerts a year. Now, it’s around six. Larson says if the amphitheater and VBC’s Mars Music Hall book more of the artists here he’s interested in, “It would definitely keep a lot more interested in staying here.”

After the city released an RFP earlier this year, three companies submitted proposals to operate the new amphitheater. A six-person selection panel selected Huntsville Venue Group. The 10-year contract includes three, five-year extension options. HVG's contract includes required annual minimums for concerts and civic events, and safeguards for termination should HVG fail to perform or for any reason the city elect not to move forward with the amphitheater.

During phase one of the contract, prior to the opening of the facility, which in addition to design and booking (some tour dates are secured 18 months in advance) includes pursuing naming rights and sponsorships, the city will pay HVG $279,000 per year. Phase two of the contract outlines the revenue and profit sharing agreement, in which the city will receive five percent of gross revenues and between 10 and 40 percent of the facility’s net income based upon performance standards. The City of Huntsville must also approve HVG’s annual operating budget and will receive monthly financial reports along with an annual audit of the management company. Contract funding has been identified from sources within city operating and capital budgets.

Like many ventures, even a major new music venue takes years to build up business. The required number of minimal annual concerts will start at around six to eight (prorated dependent upon when the amphitheater debuts, year one), and scale up. About 12 to 15 concert in year two, 20 to 25 next, and so on. A qualifying show must sell at least 75 percent of tickets.

In addition to top acts on tour, the concept to make an elite venue is intended to entice marquee acts to book shows there off-cycle, when they're off tour, for one-off shows.

“It’s all about reputation,” Murphy says. " To be memorable is important because otherwise you’re just a parking lot." He recalls when crooner Tony Bennett’s positive experience performing at St. Augustine directly led to that venue booking rocker Stevie Nicks. Bennett’s manager was having drinks with Nicks’ manager. Bennett’s manager mentioned how much they’d enjoyed their St. Augustine gig and then Nicks’ rep reached out about a one-off solo show for Nicks, an underplay for the Fleetwood Mac star. But it’s just as important is what road crews and tour bus drivers think of a venue, because they’re on the road year-round, jumping from tour to tour.

One of country music’s hottest acts, Kacey Musgraves, who packs Nashville’s 20,000-capacity Bridgestone Arena, also booked a show at the 4,800-capacity St. Augustine Amphitheater. Legends like Robert Plant perform there. And indie rock band fave The National makes it a priority to.

The city of St. Augustine’s population is only around 15,000. Huntsville is now the second biggest city in Alabama.

Like Murphy orchestrated in Florida, the Huntsville amphitheater, with its park setting, is meant to be a community magnet beyond concerts. The concept is to also host everything from graduation ceremonies and free holiday events to farmers markets and arts festivals.

“We want to make sure people understand this facility doesn’t sit dark 320 days,” Murphy says. In fact, for year five, the plan is to have the amphitheater dark for only seven days.

Side stages are planned to be part of the Huntsville amphitheater’s design. So, there should be opportunities for top local artists to perform there, at some events. Top Huntsville talent like R&B artist Lamont Landers. Landers normally plays club-level gigs, from here to New Orleans, but earlier this year was a support act on a Tuscaloosa Amphitheater bill topped by Grammy winning Alabama native Jason Isbell. “The vibe is a completely different than playing in a bar,” Landers says. “At an amphitheater, people are there to see some music, and that makes you step your game up." Having performed on TV shows like “America’s Got Talent” and “Showtime at the Apollo,” Landers is no stranger to big stages. Getting a chance one day to headline or open at a Huntsville amphitheater, “would be a dream," he says. "It’s great that’s coming here, because now I have a new goal in mind.”