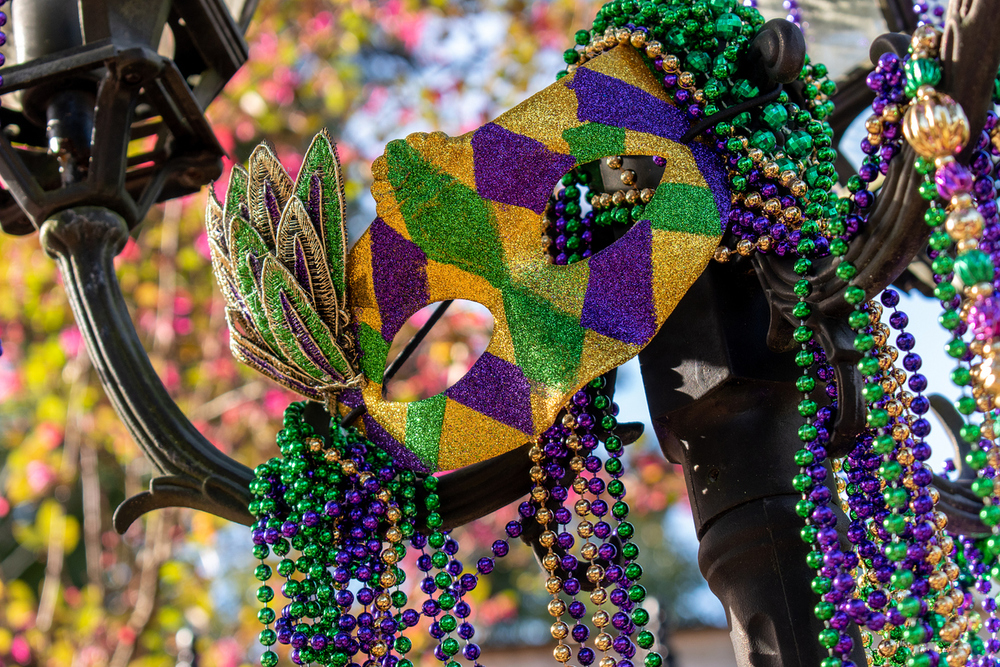 Two decades before Visit Mobile captured the spirit of Mardi Gras with an award-winning tagline, “Born to Celebrate,” Eugene Walter was angling for a party.

Carol Hunter, spokeswoman with the Downtown Mobile Alliance, recently recalled the quote while pondering whether Mobile could pull off a year-round Mardi Gras vibe to anchor its tourism industry and further rebirth of its downtown.

“I think that whole inclination of celebrating life’s big and small moments has been part of our culture,” Hunter said. “Mardi Gras is absolutely a huge part of that.”

Indeed, Mardi Gras is Alabama’s biggest money-making festival because it embraces a multi-week fun factor. Can that atmosphere be embraced by the city beyond Fat Tuesday and for a full 365 days with more parades, events and Carnival or New Orleans-inspired businesses?

Mobile city officials are focused on boosting tourism and vowing to increase the number of conventions and leisure travelers to Mobile.

Mobile Mayor Sandy Stimpson put the focus on Mardi Gras in April when he tossed out the concept of a year-round venue dedicated to Carnival. The location, according to Stimpson, would also serve as a spot for Mardi Gras balls and tableaus hosted by mystic societies while the 55-year-old Mobile Civic Center undergoes redevelopment.

Stimpson lasered in on a large warehouse at the Brookley Aeroplex, about 3 miles south of downtown. He spoke of transforming it first into a temporary home for Mardi Gras soirees by 2021. Then it would be transformed yet again, into an attraction similar in scope to Blaine Kern’s Mardi Gras World in New Orleans.

Mystic societies uniformly panned the temporary home idea – largely because the miles involved between Brookley and the downtown parade routes -- and nothing further has been heard on it.

But the vision of a year-round attraction has caught on, both with civic leaders and with Mardi Gras aficionados.

Mardi Gras World in New Orleans, which opened as an entertainment attraction in the 1980s, is a 300,000-square-foot working warehouse where designers and their crews craft floats. Visitors, throughout, the year, are treated to mini-Mardi Gras parades whenever they visit.

“I think it’s doable in the city of Mobile,” said Stimpson. “I don’t know what that looks like or who would operate it. But yes, that’s a big part of our culture and heritage and we’d have to see what direction it takes.”

In many regards, Mardi Gras has found a permanent presence in downtown Mobile in the past 10-15 years. Statues of Mardi Gras characters – kings, queens, a court jester, trumpeter -- border the 4-year-old Mardi Gras Park and have become a destination for meet-ups, photos and selfies. Historic markers have been unveiled that honor Mardi Gras history. Art shops and murals incorporate the many characters and traditions of Mardi Gras. And there’s the much-praised Mobile Carnival Museum.

“The Mardi Gras atmosphere has expanded dramatically in the past 20 years from a three-week type of event into a conscious awareness of it being year-round,” said Slade Watson, a Mardi Gras historian.

One of the newer Mardi Gras-themed spots in downtown is the Joe Cain Café, situated inside the historic Battle House Renaissance Hotel. The café takes the name of the man famously restarted Carnival in Mobile following the Civil War.

Other places popping up around downtown with distinctively Carnival-esque names or connections are Jesters, Good Times, and the MoonPie General Store.

Downtown even welcomed the opening of a beignet shop -- Mo’Bay Beignet Co. on the same day, Feb. 6, that the city lighted its first-ever Mardi Gras tree at Mardi Gras Park.

“The beauty of Mardi Gras is that it brings all kinds of people together,” said Mo’Bay Beignet Co. owner Jaclyn Robinson, who’s made a point to feature some of her Mardi Gras photography inside her restaurant.

Sales have been brisk as Carnival attendees drop in to sample the sugar-powered pastries. Robinson also provides a unique touch to her beignets by covering them in syrups that she’s created and marketed.

Mo’Bay Beignet, at its surface, might resemble something that a tourist would expect in New Orleans. But Robinson immediately shoots down any notion that her beignet shop is Mobile’s version of Café du Monde.

“Mo’Bay stands on its own,” she said. “It’s an original recipe that I made myself – my beignet’s signature syrups of buttercream and cinnamon were created by myself as well.” She said, “The beignets are quality and stand alone, but the syrups are a game changer.”

Mobile shares French origins with the Big Easy, but has long attempted to keep its cultural distance from New Orleans.

But that appears to be changing a bit, too, with the arrival of New Orleans-themed eateries like Ruby Slipper in downtown.

“Those sort of New Orleans-centric businesses have come here and have been very successful,” said Hunter with the Downtown Mobile Alliance. “Was that a deliberate plan? I don’t think so. But it’s certainly a good fit for us.”

Mobile and New Orleans have long quibbled over which city can lay claim as having America’s oldest Mardi Gras. Mobile, in recent years, has marketed its Mardi Gras merchandise as the “Birthplace of Mardi Gras.” Alabama’s tourism department, two years ago, purchased a billboard advertisement along Interstate 10 new downtown New Orleans that read, “You are 114 miles from America’s original Mardi Gras.”

But New Orleans’ mystic scene is vastly larger, and the city itself is a global tourism magnet. New Orleans drew 18.5 million visitors in 2018. If the city were in Alabama, it would account for 72% of the state’s annual visitors.

“New Orleans has a resource we don’t have and never have had, and that’s a never-ending raging river of tourists everywhere,” said Steve Joynt, the owner and publisher of the Mobile Mask website and print magazine, the latter serving as a colorful annual Mardi Gras guide since 2013.

Joynt said, “When you’ve got that, you can do things like a Mardi Gras World where you’re siphoning in gazillions of people. We don’t have that and we’re not going to have that. We need to act accordingly.”

Joynt said there is nothing wrong with Mobile attempting to derive a “mini-New Orleans” vibe that’s a year-round allure. Aside from Mardi Gras, Mobile has antebellum-style homes and historic neighborhoods such as Oakleigh that, he said, rival the famed Garden District.

“I think what we have is pretty good,” said Joynt. “I think that if the mayor wanted to improve on those, let’s improve of those instead of coming up with something new.”

Another aspect of Stimpson’s vision is to have parades throughout the year at the Arthur R. Outlaw Mobile Convention Center to bring Carnival excitement to the many events and conferences there.

“We’ve engaged in conversations with Visit Mobile to create several micro-floats so we can do the identical thing they do at Mardi Gras World,” said Stimpson. “Those floats are being designed now … You create a parade atmosphere that doesn’t go all over the streets of Mobile, but it’s enough of a parade event so that conventioneers can say they have seen a Mardi Gras parade.”

Said David Clark, president & CEO with Visit Mobile: “We would take some of these floats and go to Cooper Riverside Park every weekend … so our visitors can experience it.” He said, “What I would like to see is Mardi Gras happening every weekend throughout the year so we can show our conventioneers the things we offer.”

Wayne Dean, a historian who has long portrayed Chief Slacambamarinico – the fictitious Indian chief character dreamed up by Cain in 1868 – said he would love to see some of the established mystic societies contribute to the year-round atmosphere.

“Even if it’s on the weekends, it would generate money and income, and excitement for people who are only in town for those weekends,” said Dean, who dresses up as “Chief Slac” and attends civic events throughout the year.

City Council President Levon Manzie said, “There is something unique in the feeling in the air that Mobile has during Mardi Gras season. It’s a uniqueness not experienced anywhere in the country with the exception of New Orleans. If we could, in some way, encapsulate that feeling and vibe and use that 12 months of the year, I think it would just be a win.”

‘Build on what you have’

Jeff Jordan, who has operated Mardi Gras & More on lower Dauphin Street since 2004, said that striving for a continual Carnival would dilute the actual Carnival.

“It only happens once a year,’ said Jordan. “I think really that if you try to do too much during the year, it takes away from that special time.”

In Jordan’s view, the best course for the city is to double-down on its efforts to revitalize downtown, which is also the heart of Mobile Mardi Gras.

“I think really one of the things the city has looked away from and is finally seeing a light on is the residential development downtown,” said Jordan, whose shop sells colorful beads, t-shirts and masks. “I grew up here and have been down here since the ‘60s. It was a hopping place then, but fell apart in the ‘70s and ‘80s. That is what made it fall apart. When the residents left, downtown crumbled.”

Ann Pond, a Mobile historian, said the success of a year-round Mardi Gras atmosphere will depend on the city’s ability to “take advantage of its burgeoning downtown” where hotels and entertainment venues are in easy walking distance of one another.

Pond advocates that the city consider engaging in a “well-organized and fully cooperative effort” led by a task force to develop a strategic plan to look at ways to highlight Mardi Gras throughout the year.

She believes a self-guided “Mardi Gras Walking Trail” would be a sought-after attraction in downtown Mobile.

“Build on what you have first,” said Pond. “Mobile has an ideally condensed and very walkable, aesthetically pleasing downtown with charming historic appeal. New developments are making this area even more livable and inviting. Taking advantage of this is crucial and the addition of a small-scale parade rolling through the streets periodically throughout the year would greatly enhance this new vibrancy, making Mobile a valuable tourist destination.”

No other place in downtown Mobile celebrates Mardi Gras throughout the year more than the Mobile Carnival Museum on Government Street next to Spanish Plaza. The museum opened in 2005, and has grown to become the city’s third most popular tourist attraction behind the USS Alabama Battleship Memorial Park and Bellingrath Gardens.

The museum is a historic home dating to the 1870s. Inside are displays that give tourists a sense of Mobile’s unique relationship with Carnival. One of the galleries displays the colorful and shiny gowns, trains and jewels worn by the queens of Carnival during Mardi Gras balls.

Cart Blackwell, the museum’s curator, said it’s not uncommon for the Carnival Museum to loan displays to other museums and art galleries around the city so that Carnival can be displayed and celebrated year-round.

Blackwell, like Jordan, said he sees the betterment of downtown Mobile and the continued growth of Mardi Gras going together. For instance, he said that along Government Street – where “sketchy places” like vacant lots once existed, are now popular parade watching spots.

He also provided some other examples: Serda’s, a popular microbrewery on a Government Street parade route, was once a car repair place. A crumbling American Legion post, also along Government Street, has recently been revitalized into a mystic society gathering space.

“Mardi Gras is Mobile’s greatest living tradition,” said Blackwell. “It has been embraced since the beginning. It’s increased in scopes and forms in recent years. I see it both continuing (that way) through the grassroots, civic, scholarly and artistic. We’re experiencing a particular renaissance of Carnival culture on so many levels.”