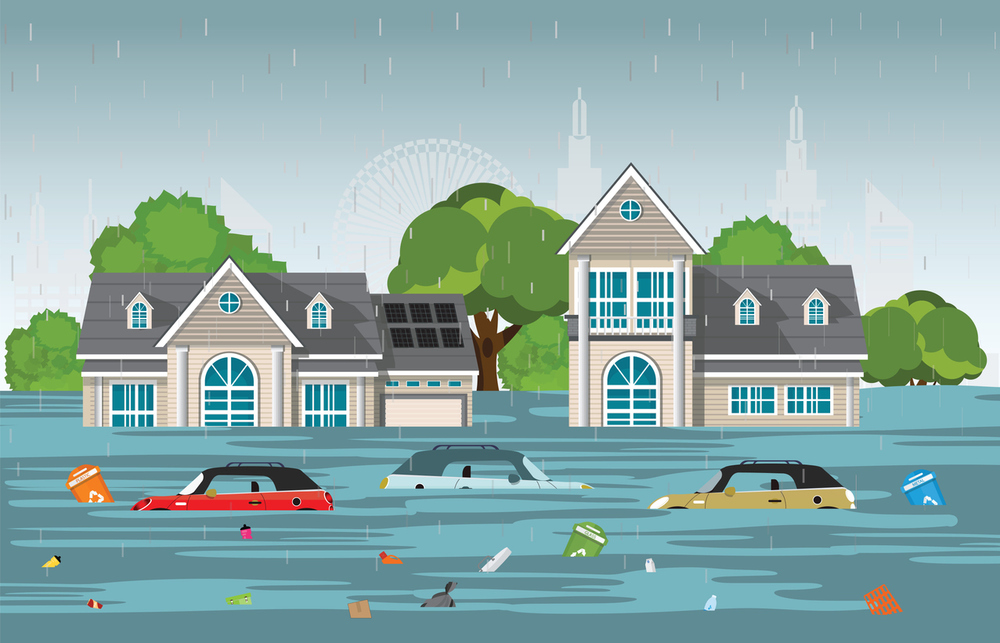 Millions of people rely on real estate websites when they're hoping to buy or rent a home. Major sites such as Zillow, Redfin, Trulia and Realtor.com feature kitchens, bathrooms, mortgage estimates and even school ratings. But those sites don't show buyers whether the house is likely to flood while they're living there.

Now, Realtor.com has become the first site to disclose information about a home's flood risk and how climate change could increase that risk in the coming decades, potentially signaling a major shift in consumers' access to information about climate threats.

"People are buying property with little knowledge of whether it's going to flood or not," says Harriet Festing, co-founder of the advocacy group Higher Ground, which connects people across the country who have survived floods. "It ruins lives."

Still, other websites such as Redfin, Zillow and Trulia have no plans to share information about flooding with users. Millions of buyers risk overpaying for homes likely to be hit with a natural disaster over the course of a 30-year mortgage. But representatives for other realty sites say home sellers are reluctant to publish flood risk information, since it could decrease their home's value.

The last to know

Realtor.com says each of the approximately 110 million home listings on its site now includes both publicly and privately assembled flood risk information.

The public data is about whether the house is located in a flood zone, as determined by the Federal Emergency Management Agency. Some homes in a FEMA flood zone are required to have flood insurance, and such policies are generally more expensive because there's more risk.

But federal flood maps do not cover the whole country and do not account for rising seas or extreme rain, trends driven by climate change that make flooding more likely in the future in many places.

The lack of reliable federal information about future flood risk has led corporations to either do their own studies or purchase private flood models. In recent years, that has meant that developers, insurers and banks increasingly have more detailed scientific information about flood risk in a given neighborhood than the people who live there.

"There's for-profit companies and commercial actors that are taking this data, taking this knowledge, and using it to have an advantage to buy or sell homes. They're using this at an advantage over your everyday American," says Matt Eby, one of the co-founders of the private First Street Foundation, which has spent the past few years modeling flood risk across the country to make such information available to the general public. He adds: "A democratization of this data is how we like to think about it."

In June, First Street published nationwide flood risk information for millions of properties. People can search for an address, a ZIP code or a city and see how likely it is to flood now, and how likely it is to flood in the next 30 years. It's also possible to compare the new flood analysis to FEMA's flood designation. Each property in the First Street database is assigned a score between 1 and 10, with 1 being the least flood risk and 10 being the most.

Beginning today, Realtor.com will publish those scores alongside FEMA's flood designation for every property on its site. It does not say whether the property has flooded in the past because such information is not publicly available.

"It's really important for consumers to know this," says Leslie Jordan, senior vice president of product at Realtor.com. People who are hoping to buy a house need to know the true cost of purchasing and maintaining the building, including the cost of insurance and repairing damage. If flooding is a potential problem, Jordan says they should know about it before they make an offer.

Disclosing flood risk for homes that are outside the official floodplain is important. About one-third of federal disaster money paid out to flood survivors goes to people who do not live in designated flood zones.

Jordan says there are things people can do to protect their homes against floods, but first they need to know that they are at risk. "They can elevate their home on stilts," she says. "They can add a sump pump into the basement. They can install a rain garden outside."

The Association of State Floodplain Management warns that people who are trying to mitigate flood risk should not rely solely on the Flood Factor score because the model underestimates flood risk for some properties and overestimates it for others.

Realtor.com also sees flood risk disclosure as a competitive advantage. Jordan says: "The more transparent we can be about these properties — about all the data about them — the more consumers will trust us as a legitimate source to make their home-buying decisions."

Other websites holding off

For other popular real estate websites, such as Zillow, Redfin and Trulia, discussions about publishing flood risk have come up internally, but there are no current plans to follow Realtor.com's lead.

"There are a number of challenges with that," says Jeff Tucker, an economist at Zillow. "It's something that I think, sooner or later, would be a great feature to include."

Zillow, through its research arm, has run its own analyses about how climate change could take a significant toll on housing nationwide, through both floods and wildfires.

"Hundreds of billions of dollars — just a tremendous amount of real estate at risk, primarily from coastal flooding, for instance," Tucker says.

Redfin has also done surveys showing that three-quarters of its buyers want information about natural disasters before purchasing a home.

"We don't want the lack of information to result in millions of dollars of overspending on housing," says Taylor Marr, lead economist at Redfin. "This is especially true, some preliminary research has found, in low-income minorities."

Still, the real estate websites say if they share flood risk, they expect pushback from home sellers who are concerned that it makes their home less desirable.

"We need to be very careful about how we provide information," Marr says. "Could this actually reduce the value of this existing homeowner and essentially take away a lot of their net worth?"

Marr says that in a competitive market, Redfin wouldn't want flood risk to crowd out the information that's most heavily used by prospective buyers.

"If we made the whole front page just about flood risk, they might not be as easily able to navigate how long the commute is, for example," Marr says.

Jordan, of Realtor.com, says her team did "extensive user testing" to figure out how to present flood risk information. In the end, they decided to put both the FEMA risk designation and the private flood risk score near the top of the listing. People who click on it get more detailed information about what the flood risk means.

Jordan also points out that anyone can look up a property's flood risk on First Street's website, which means that information could be part of real estate transactions whether current homeowners know about it or not. "The data is going to be figured out at some point," she says. "It's better that it be disclosed at the beginning."