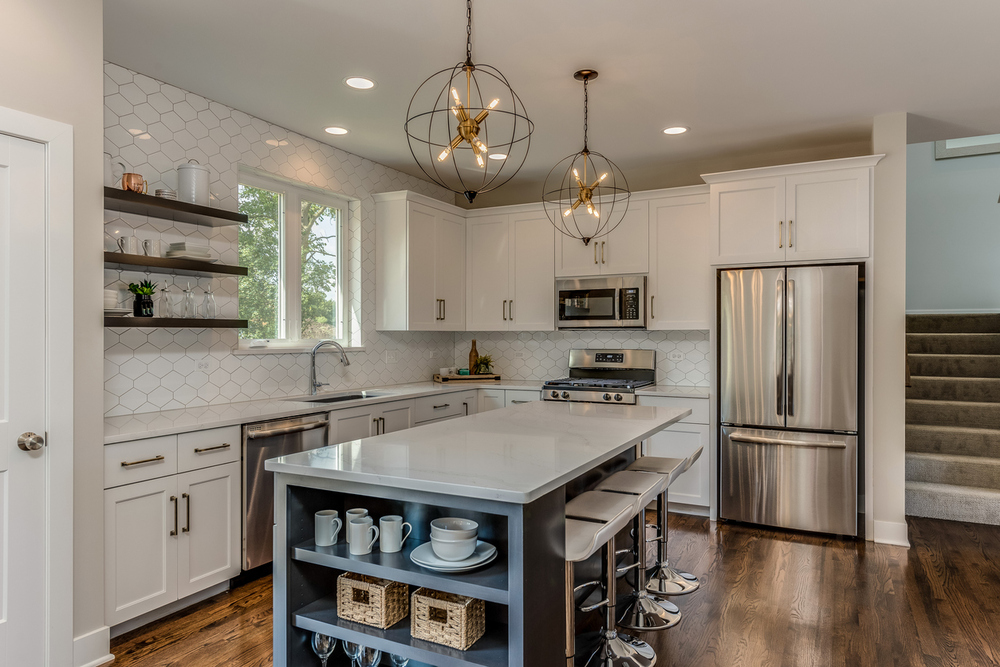 Taylor Spellman, star of the new Discovery+ series “One Week To Sell,” specializes in fixing up seemingly unsellable homes so they’ll attract buyers. And while she’s worked on some ugly, unappealing houses on the show, sometimes the homes are just old.

In the latest episode, “Disco Fever Gets a Retro Rehab,” Spellman is called to a 1970s home in the quiet community of Monroe Township, NJ. This three-bedroom, four-bathroom home is large, and listed for a reasonable $450,000—but it’s dangerously dated. From the ugly blue carpet to the dark-brown kitchen, it’s no surprise this house has languished on the market for a whopping year and a half.

Now, it’s up to Spellman and her team to bring this ’70s house into the 21st century—and as it turns out, it’s not as hard as it sounds.

“The truth is the ’70s may sound old, but a lot of current design trends borrow from that era,” Spellman says.

Still, with only $8,000 and six days to renovate, Spellman will have to hustle. Here’s how she updates this old house fast, finally reeling in an offer. Her savvy sales moves might inspire some changes around your own home, too.

1. Trim the hedges so you can see the front door

When Spellman first walks up to this home, she’s deeply unimpressed. The front door is hidden behind overgrown shrubs, making it look unwelcoming and untidy.

“My first impression,” Spellman says, “is that it’s hard to get the buyer through the door when you can’t find the door.”

She tries to brighten this space by trimming the plants—but realizes that some of the ugly bushes were hiding an even uglier pipe, which is sticking out of the ground.

Spellman replaces the bush with some potted plants, which hide the pipe without overwhelming the entryway.

To finish the look, Spellman adds a bench to the left of the door, which makes the space feel a little homier.

“Adding a bench is an easy and inexpensive way to make a porch feel like an invitation,” Spellman says.

2. No budget for hardwood? Carpet can still look good

Inside the house, Spellman finds a living room with something truly unfortunate: blue carpet.

This colorful carpeting is so dated, Spellman knows it needs to be replaced immediately. But unfortunately, there is no beautiful hardwood floor hiding under this sea of blue. Spellman has no choice but to replace this old floor with more carpet.

“Under this carpeting there’s only plywood, and with this budget, there’s no way I could bring in hardwood floors,” Spellman says. “But I can bring the carpet into this century by making it a chic, neutral color.”

She selects a soft, tan-gray carpet that brightens up the room and makes the space feel less like a time capsule. The carpet costs only $1,340, but it makes a huge difference.

3. Even a tiny bit of wallpaper can go a long way

While replacing the carpet really improves the living room, Spellman knows that the recessed shelf could also use an update.

With a mirrored back and green-tinted glass shelves, this feature ages the room in the worst way. However, Spellman knows better than to cover up this handy storage. Instead, she paints the frame a modern black and covers the back wall with dark-green wallpaper.

“The ’70s were all about textures and bold colors,” Spellman points out. “So I picked this wallpaper for the living room because it’s texture and a color, just more for the modern buyer.”

After installing the wallpaper, the shelving looks great. The dark colors make the feature look more modern, and the green wallpaper even makes those tinted glass shelves feel new.

“Now this sea-foamy green glass that, at one time, was very dated looks like it matches the sea-foam green tone we got here,” Spellman says.

4. If you can’t replace carpet, cover it up

Spellman is able to make big changes in the living room, but after replacing the blue carpet, she doesn’t have the budget to rip out the gold carpet in the dining room. So she gets creative.

“I don’t have enough money to redo the carpeting,” Spellman says, “so the solution to this dining room carpet situation is I’m going to lay down a rug and then two runners that are all the same weave, and basically it will cover the entire dining room carpet and totally transform the room.”

In the end, the rugs are great, making the room look bigger and much more modern.

While homeowners may not want to completely cover their carpet with a rug, it’s a smart lesson that a good rug can do wonders. Whether it’s bringing dimension to a room, adding a pop of color, or covering up a less than desirable floor, a rug can be a cheap fix for any living space.

5. Add an island to make a kitchen more functional

Spellman is definitely disappointed when she sees the dark and dated kitchen, but she comes up with a plan to improve it right away.

First, she paints the cabinets green, which gives the space a fun, fresh personality while keeping its vintage charm. A green kitchen may be an acquired taste, but it could be perfect for a buyer who loves midcentury modern style.

Then, to finish the kitchen, Spellman adds an island with a marble countertop, a small slab she buys for only $234.

“When doing a kitchen upgrade with marble, you don’t necessarily need to do the entire countertop to make an impact,” Spellman explains.

The two tones of countertops may not match, but the choice does look intentional. When Spellman is finished, it’s clear that this island is a great design choice that makes the kitchen more functional, more stylish, and more modern.