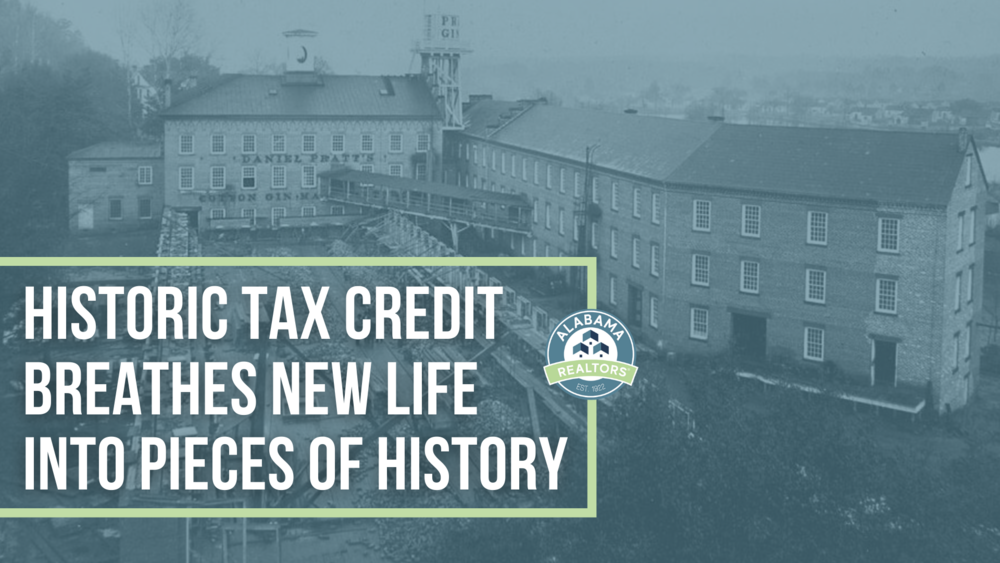 Much of Alabama’s story can be found in the walls and halls of its historic buildings, many of which have been preserved and repurposed to meet modern needs. Thanks to a 2013 act of the Alabama Legislature – an act that was renewed in May 2021 for five additional years with support from the Alabama REALTORS® – a 25 percent state tax credit is available to property owners and developers seeking to renew or repurpose historic buildings.

Alabama is one of 30 states utilizing tax incentives to fuel preservation efforts. Properties must be at least 60 years old and meet historic designation criteria. Commercial project funding is capped at $5 million, and the tax credits for each year of the program cannot exceed $20 million. To ensure equity between urban and rural projects, 40 percent of each year’s funds are earmarked for rural projects. Any unused rural funds are made available to urban projects that are in higher demand.

Old movie theatres – once the entertainment hubs of small towns – are an easy choice for redevelopment. Long before Home Town Takeover chose Wetumpka for revitalization, Birmingham-based Capital Management Program bought the 1937 Fain Theatre located steps from the Coosa River. A $221,250 tax credit was allocated in 2018 and the building now features two multi-level apartments and a retail wine and cheese shop.

Like many old movie theatres, a small stage allowed live performances at The Fain in addition to features on its silver screen. In its heyday, the theatre hosted big stars like The Three Stooges and their slapstick “nyuk-nyuk” antics, legendary singer-songwriter Hank Williams and iconic Western movie heroes Roy Rogers and Rex Allen with his horse, Koko.

The school had a much different role during the Civil War. Barton Academy served as a hospital for Union soldiers. A few years before the war, Barton served as a hospital during Mobile’s yellow fever epidemic.  Some believe the building still houses spirits. A 2019 story by local television station, WKRG, featured a Mobile County Sheriff’s office corporal who is also a ghost hunter. Armed with a “ghost box” radio, reporters and the ghost hunter seemed to encounter a spirit or spirits in the Barton Academy boardroom where they heard an unidentified voice respond to questions via the ghost box.

With the help from the historic tax credit, Barton Academy now is infused with a new spirit of community pride. It is set to reopen later this year as Barton Academy for Advanced World Studies, a magnet school for 300 students in grades 6-9.

Prattville’s iconic Continental Gin is picturesque even in ruins. Situated along Autauga Creek at the edge of the city’s downtown historic district, developers and city leaders have puzzled over the preservation and redevelopment of the landmark for more than a decade. Originally the Daniel Pratt Cotton Gin Company built in the 1830s, it was the world’s largest producer of cotton gins – a product in high demand until the Civil War. A merger created the Continental Gin Company in 1899 and the company operated as Continental Eagle Company until 2009.

Continental played an important role in World War II as one of the first southern industries to support the war effort, according to a social media post by Save the Daniel Pratt Gin Factory. “CGC was so heavily involved, the company had an office in Washington, D.C. for the entire four years of the war. A portion of CGC’s plants in Birmingham, Dallas, and Prattville were converted to build bombshells, gun mounts & turrets and other munitions.”

Last year, construction began on 145 loft-style apartments in the five historic structures that locals call the “gin shop.” Purchased by the Historic Prattville Redevelopment Authority and now named The Mill, the project was awarded a $5 million state historic tax credit in 2020 and is expected to create further economic growth for downtown Prattville.

Built in 1837 (and known as The Brantley Hotel) along the banks of the Alabama River, the St. James Hotel has witnessed more than its share of history and has a few stories of its own to tell. Once a gathering place for plantation owners, the hotel stands in the shadow of the famous civil rights landmark Edmund Pettus Bridge.

But during the Civil War, al.com says The Brantley was occupied by Union troops during the Battle of Selma. Because Confederate arsenals and factories were nearby, the army burned much of the city. Fortunately, the St. James and other structures on historic Water Street were spared.

After the war, legendary outlaw brothers Frank and Jesse James reportedly were guests at the hotel and may still be around. The hotel was closed for more than a century but after reopening in 1997 there were reports of “apparitions” of Jesse James and his girlfriend, Lucinda. Guests also reported hearing barking or running “ghost” dogs in the hotel’s courtyard and hallways. Others report seeing apparitions of guests in the courtyard dressed in clothing from the 1880s.

One of the National Trust for Historic Preservation’s Historic Hotels of America, the St. James reopened this year following a $5 million renovation and $1 million state historic tax credit. The hotel is the last remaining pre-Civil War riverfront hotel in America.

In the late 1800’s Birmingham was on the cusp of becoming a powerful city both literally and figuratively. In need of a centralized power source, Consolidated Electric Light and Power Company built the giant Powell Avenue Steam Plant in the heart of downtown Birmingham. The coal-fired plant, built in 1895, fueled streetcar lines in the city and provided electricity to homes on the city’s outskirts. Eventually becoming a unit of Alabama Power Company, the Powell Avenue Steam Plant operated until 2013.

Of course, the plant sported much heavy equipment during its century of service. One of the most interesting was a complex system of belts and pulleys that ran various maintenance tools at the plant. Described as Rube Goldberg looking, the system had eight or 10 different pieces of equipment, like grinders and drills and saws all run by belts off one pulley system.

Developers, Orchestra Partners, say the Powell Avenue Steam Plant will generate a new kind of energy as part of its Parkside project master plan. Adjacent to Railroad Park, the steam plant will be transformed into an entertainment venue hosting movies, music, events, retail, restaurants, and more. The project was approved for a $5 million state tax credit for 2022.

A beloved 1902 Dothan grammar school now is home to 55 affordable apartments for senior citizens. The Howell School was replaced by another elementary school in 1942 but continued to serve the Dothan area in a variety of iterations until the property was acquired by the city in 2008.

During World War II, the building was home to the Salvation Army’s Red Shield Club – a free hostel with beds and showers for soldiers. It later housed the Indian River Textile Company’s plant before Dothan Manufacturing used the building as a men’s pajama plant. In 1997, the pajama plant closed and Howell was sold to the Southern Alabama Regional Council on the Aging. The building sat vacant for years while a local architect spearheaded an effort to restore and repurpose the schoolhouse.

Now, Howell School Senior Apartments, with the help of a $1.5 million state historic tax credit, continues more than a century of service to Dothan area residents.

Alabama’s Historic Tax Credit has a profound impact on both preservation and revitalization.  View a map of projects and read more about the tax credit here.