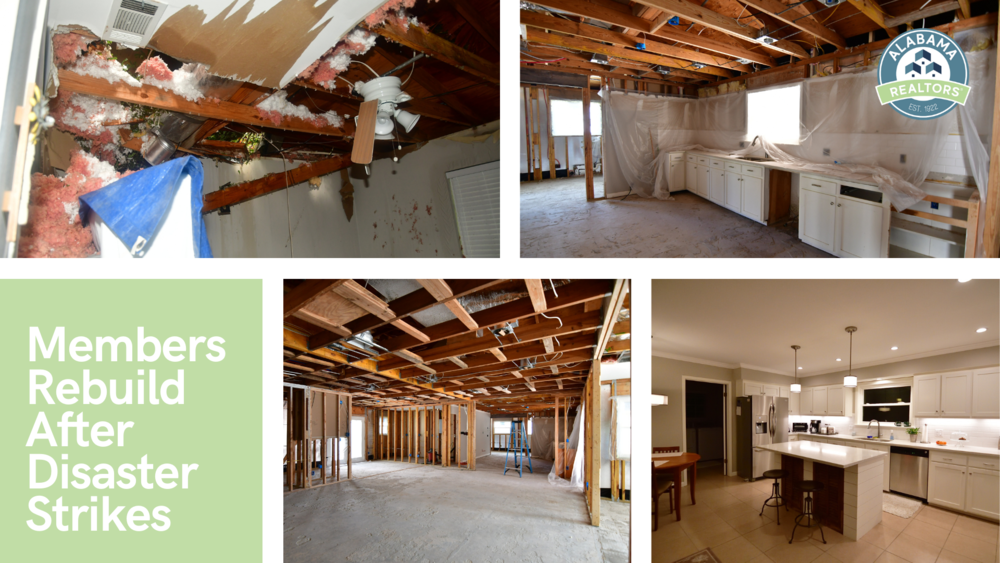 As if a pandemic wasn’t challenging enough for Realtors® last year, hurricanes Sally and Zeta swept through south Alabama causing millions of dollars of damage and disrupting business for weeks. Among the victims were some of our own members and their clients, friends and family. In an effort to help those in need, the Alabama Realtors® Foundation disbursed monetary aid to help cover the costs of damage not already covered by insurance.

Following Hurricane Katrina in 2005, Alabama Realtors® created a disaster relief fund to provide aid to Realtors® and homeowners affected by the storms. To expand its reach, the fund has since evolved into the Alabama Realtors® Foundation and includes scholarships for children of Realtors® and financial assistance to members and their families during temporary periods of financial difficulty due to prolonged illness, a catastrophe, accident or death.

Recently, the Foundation provided disaster relief assistance to two Realtors® affected by Hurricane Sally. Here are their stories and how the Foundation helped them in a time of need.

Colleen Black is thankful that her invitation to her friends to stay in her Fairhope home was turned down. As Hurricane Sally approached the Gulf Coast on September 16, Black’s friends were staying in an RV and she offered them safer accommodations in her home. Late that night, a neighbor’s tree crashed into the guest bedroom they would have occupied leaving a gaping hole in the roof and causing the ceiling to collapse.

Black and her husband/real estate partner, David, left their primary bedroom to survey the damage and bail water as the room flooded. Moments later another neighbor’s tree crashed into the primary bedroom.  More ceilings fell and a broken water line compounded the extensive storm damage.

“I had never been through a disaster,” Black said. “I was not prepared to deal with this.”

A Qualifying Broker with eXp Realty, Black and her husband are relatively new Fairhope homeowners. Focusing on real estate markets in the Birmingham area and Alabama’s Gulf Coast, the Black Team transitioned their home base from Shelby County to Fairhope four years ago purchasing a 1970s home in a well-established neighborhood near the bay. Seventy percent of their new home was destroyed and, because of its age, the City of Fairhope required that it be rebuilt to current code standards – new wiring, windows, plumbing and HVAC – all during a pandemic when contractors were scarce and costs skyrocketing.

Black estimates the cost of restoring the home at $200,000. Insurance will cover much of the cost minus a $15,000 wind deductible. She found that her homeowners insurance also had a small allowance that covers legal requirements to bring an older home up to newer code standards.

“But there are a lot of out-of-pocket expenses,” explained Black. “On top of that, I haven’t been able to focus on our real estate sales while trying to get our life back together. In real estate, we have to work every day on lead generation and building our business.”

Broker Kelly Colley was one of the Black’s many blessings. “She contacted the Alabama Realtors® Foundation and submitted everything needed to apply for assistance. I was completely unaware of the Foundation.  We really appreciate her doing that for us,” Black said. “I’ve tried to designate the $2,500 gift for the extra out-of-pocket expenses in rehabilitating the house.”

Black continues to count her blessings. “There have been so many,” she said. “People in the community reached out to us after Sally. A friend showed up with a generator and huge cans full of gasoline. We were able to find a rental house in a market where there are few rentals. I’ve learned so much about insurance and construction.” With general contractors in high demand and short supply, Black is serving as her own general contractor.

The future looks brighter in 2021 thanks to the help of Black’s community and the financial support of the Alabama Realtors® Foundation. She hopes her home will be ready by the end of the summer. “I’ve never been the recipient of so much help before. So, of course, we now know the good ways to help others when disaster strikes.”

Editor’s Note:  For personal reasons, this Foundation recipient asked that we not use her real name.

On Alabama’s Gulf Coast, Realtor®/broker Christina Michaels and her husband huddled in a closet for 10 hours unsure whether they would survive Hurricane Sally’s attack. The Category 2 hurricane made landfall on Wednesday, September 16 with maximum sustained winds of 105 miles per hour and gusts to 155.

This wasn’t their first hurricane rodeo. The Michaels came to the Gulf Coast in 2003 and have seen hurricanes, floods and a major oil spill. Normally, they would evacuate. This time was different. “It was not supposed to be a strong storm,” Michaels explained. “We had elderly neighbors we were trying to gently nudge to get on the road. We felt like we couldn’t leave them.” The storm began to hit on Tuesday evening. “We worked all Monday night and Tuesday on pure adrenaline preparing for the storm. We realized on Wednesday that we were wearing the same clothes we put on Monday. We had literally done everything we possibly could to prepare.”

As the storm approached, the Michaels shifted their focus to survival and sheltered in their home. “After about seven hours, we started realizing the house wasn’t going to stay together,” said Michaels.

“With our personal papers in Ziploc bags tucked inside backpacks, we were going to try to find a way out,” she continued. “There was no electricity and it was dark – all the windows and doors were covered with hurricane protection." Not sure if it was safe to go outside, they stayed. “Water starting rising inside the house so we went upstairs but, because the ceiling was in danger of collapsing, we quickly realized we were safer in the water. Once the storm ended, we could not open the back door because of the pressure. Cell towers were down. Finally, someone in Louisiana was able to reach us by phone and call our family.”

The Michaels were in water above their knees for eight hours until they were able to go outside and survey the devastation. “Everything was just destroyed,” Michaels said.

As soon as they had cell service, former clients began calling to offer their condos as temporary housing. The Michaels made their way through the destruction and realized there was no place to stay except their heavily damaged home. “Our clients’ condos were damaged and they didn’t know yet,” Michaels said. For 12 days they were without electricity or water, but the community banded together and the cleanup began.

The Michaels – and their insurance adjuster – believe their preparation before the storm helped mitigate the damage that is estimated at $150,000. Early in 2020, Michaels had a strange feeling about the upcoming fall season. She began buying folding stepladders that were used in the storm to elevate furniture. The Michaels even removed their interior doors from their hinges and placed them on top of furniture to avoid water damage. Those efforts saved them thousands of dollars.

However, there were setbacks. COVID struck the Michaels twice. “We were sick in March and again in October,” Michaels said. She believes the second bout of COVID was a result of so many workers coming in and out of their home. It was unavoidable. While quarantining, the Michaels were unable to bring contractors into their home and they moved to the back of the line for projects.

The Alabama Realtors® Foundation was helpful in an otherwise discouraging time, Michaels said. Insurance claims took eight weeks to process while out-of-pocket expenses continued to mount. Meanwhile, there was no income. One of her agents completed the paperwork to apply for Foundation assistance. The Michaels received $1,400 – enough to cover one month’s mortgage payment. “It was such a bright spot in that there was a Foundation that could help in this situation where money was always going out. All these years I’ve paid to be a member of an organization – and you get the benefits – but this is one more example of how they’re working on our behalf.”