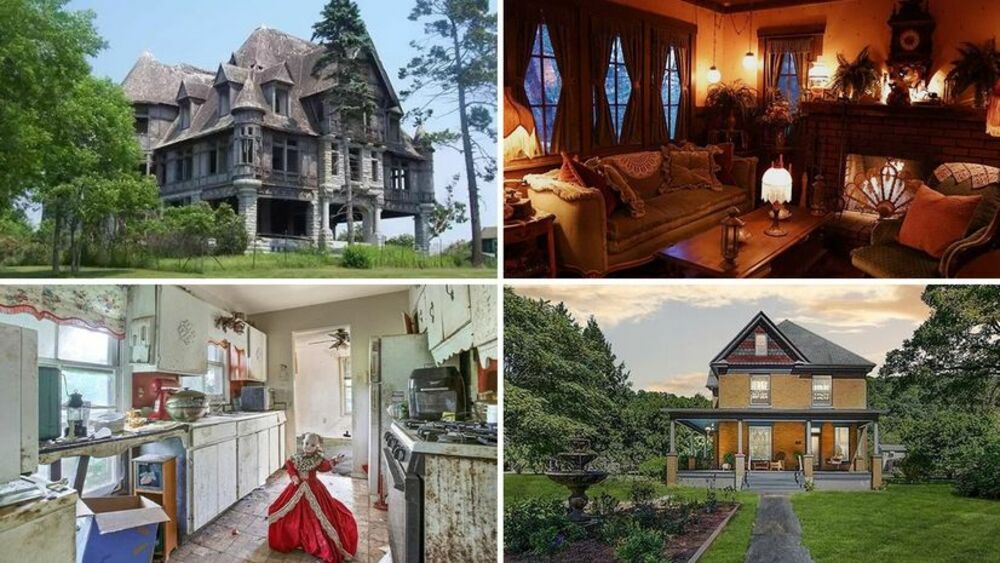 In every neighborhood, there’s always that one house.

It’s the one that looks neglected and scary. The one that everyone eyes with curiosity but avoids on Halloween. The one where kids dare each other to touch the mailbox, or if it’s a double-dog-dare situation, creep up to the front door and knock—then run.

Sometimes these houses may not appear particularly noteworthy on the outside, but the interior photos reveal a whole carnival of weird, eerie mannequins or a cryogenic storage chamber intended for human heads.

Sure, houses that look haunted, even if they aren’t, are as old as the hills. But what happens when such properties are put on the market, with a cheery, chipper “For Sale” sign out front? Do they ever actually sell?

Well, in this tight housing market, it appears that people will buy just about anything—even if it scares them a little.

Who are these intrepid buyers? Some may be undaunted by the uncanny, and some may be simply desperate for a deal. Some may be developers planning to tear the whole thing down and start fresh.

Then, there are homebuyers who are actually thrilled to buy creepy houses, and even seek them out.

“There are lots of people who are attracted to scary-looking houses,” says Josh Judge of Berkshire Hathaway HomeServices Verani Realty in New Hampshire. “There’s actually a segment of people who would love to live in a house that could be haunted.”

Judge himself has listed quite a few homes that are over a century old and that haven’t received much TLC lately—and he’s found that at least to a certain set of buyers, that’s attractive.

“The buyers describe it by saying, ‘The house has character. Lots of character,'” Judge explains. “But I think they’re attracted to it more because the price may be a little lower, and they justify their purchase by saying they like the ‘character.'”

It’s often the case that the creepier the listing photos, the faster they go viral online. This doesn’t always translate into a successful sale, however. Want proof? Take a look at some of the more hair-raising houses we’ve seen on the market, and whether the creep factor has worked for or against them.

The name “Twin Peaks” alone is enough to give you the shivers, but when you find out that this unusual retreat belonged to the quirky creator Christine O’Connell, famous for her otherworldly interior and exterior home decor, you know it’s going to have a spooky (but oddly compelling) vibe. Dark listing photos of séance-ready rooms add to the mystique.

Did it sell? This two-bedroom, two-bathroom, 948-square-foot home sold in June, after about two months on the market, for $430,000—well above list price. This could have something to do with O’Connell’s celebrity status. Perhaps buyers paid extra for the famous furniture and accessories, which were not included in the original list price.

The presence of a pair of truly creepy dolls in the photos of this less than remarkable three-bedroom, 1,370-square-foot Louisiana house may have made the listing go viral, topping our Sept. 17 list of most viewed homes.

Did it sell? Apparently the dolls won the day, because the owners accepted an offer just a few days after it was posted. Go figure.

This house was so run down and full of trash that the real estate agent decided just to leave it as is, including comments like this in the listing: “If you are a fan of horror flicks and supernatural, you will love the creepy feel this home has, with all the creaky boards, cold walls, and the haunted exterior look with broken siding, and weeds growing into the home.”

Did it sell? The strategy for the sale of this three-bedroom, one-bathroom home hasn’t paid off yet, although the price has been dropped by $3,000. Still, it’s only been on the market for about two months, so time will tell.

Built in 1875, this home belonged to the local sheriff and was used for the temporary housing of those who ran afoul of the law. The front house, however, is pristine, with a recent remodel including new hardwood floors, high ceilings, crown molding, a new kitchen, and updated bathrooms.

Still, the jailhouse with nine cells out back didn’t do much for the sale of this two bedroom 1.5-bathroom, 2,465-square-foot home built in Fayette, MO, other than raise the dark history factor.

This waterfront castle, known as the Carleton Island Villa, sits on 6.9 acres, just over the border from Canada. This 11-bedroom, 15,000-square-foot Gothic beauty is completely open to the elements, and there haven’t been many major renovations made since it was built in 1895.

It hasn’t even been lived in for more than 70 years, but the fact that it hasn’t toppled over by now must mean that it has good bones, even though it would take millions to revive them. It’s the ultimate scary movie set for the producer who wants to invest.

Did it sell? Nope. It’s been on and off the market at least since 2012, always at the same price.

This duplex made the news big-time when listing photos revealed the kitschy mannequins throughout. Surprisingly, their placement was not a publicity stunt. The owner collected them, loved them, and wanted them to be seen.

Of course, the photos went viral—they were too weird not to—and the seller was so optimistic he raised the price to $675,000 in the wake of all the publicity.

Did it sell? It sold at the end of June, for the way, way reduced price of $550,000. For that price, we’re betting the owner took the mannequins with him.

Sometimes a house’s reputation is even creepier than it looks. Such is the case with this four-bedroom, one-bathroom 1910 Queen Anne-style house. It looks innocent enough from the outside, but everyone knows it was the setting in “Silence of the Lambs” for the home of the serial killer Buffalo Bill, who kept his victims locked in the basement. Yes, many scenes from the film were shot there. That has to leave you feeling a little squeamish, right?

Did it sell? Listed at $298,500, the home sold for $290,000 in January 2021, to a buyer who purchased the place with plans to turn it into a boutique accommodation for overnight stays, as well as guided tours.

This rustic artists’ retreat, on 23 mostly wooded acres, which used to be known as Golganooza, looks as if it could be the setting for the film “Midsommar,” starring Florence Pugh.

The original section of the log home was built in the 1830s, but it acquired its extravagant decorations in the 1970s, when its owner, a local art professor and poet, kept the place as a hippie hideout.

Several other rustic wood outbuildings could be used for studios, workshops, or storage of heaven knows what. Come to think of it, Jordan Peele could also set a scary movie here.

Did it sell? It may just be too soon to tell, given that the home was only listed in September. At least the price is right.

This two-bedroom, two-bathroom Mediterranean may not appear all that forbidding on the outside, but anyone who’s ever dreamed of trick-or-treating there knows that it is one of the infamous Charles Manson murder houses, where Leno and Rosemary LaBianca were brutally killed in 1969.

One peek inside is all you need to set your nose wrinkling at the thought of entering this two-bedroom, one-bathroom cabin, which stands alone on 20.43 acres.

That’s because almost every square inch of it is covered with cat paraphernalia, from floor to ceiling and everywhere in between. There’s nothing inherently creepy about cats in general, but this amount of feline fanaticism can’t help but overwhelm.

Did it sell? Not yet. Even though the photos went viral and the price was reduced from $240,000 to $150,000 over the years, the owners apparently didn’t receive an offer they couldn’t refuse, and took what’s become known as the “Cat House” off the market. Meow!