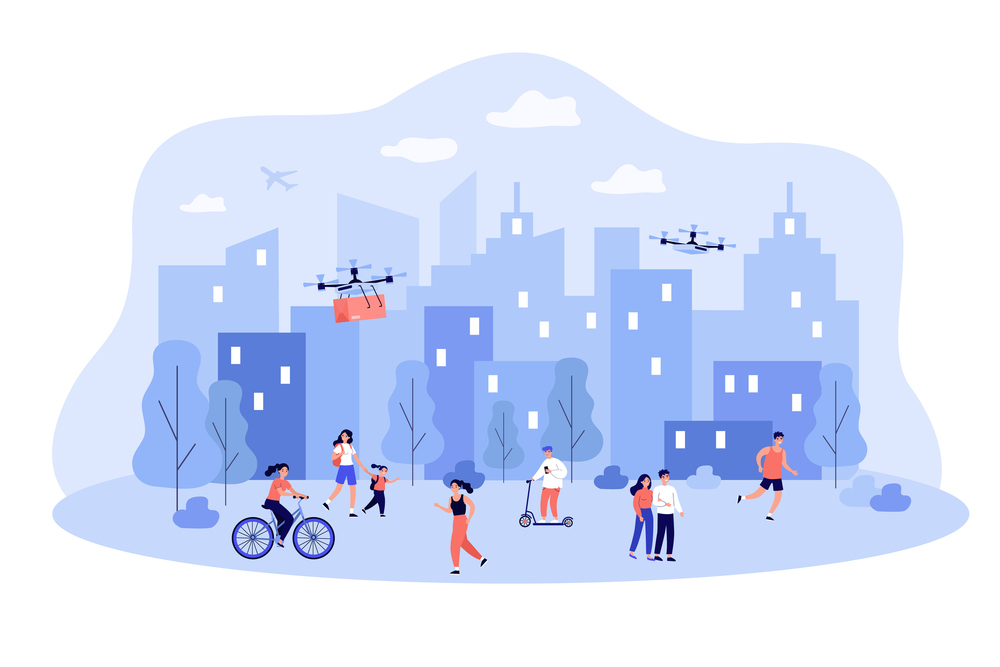 The city of the future is all about connecting people, technology, and the environment.

Public and private partners are working now to plan the city of tomorrow. The new urban landscape will combine energy efficiency, a mix of commercial and residential real estate, a variety of transportation options, and connectivity—all supported by state-of-the-art digital technologies and sustainable practices, said experts at the Urban Roundtable session at the REALTORS® Legislative Meetings on Thursday.

The goal is to achieve net zero carbon—that means reducing human-caused emissions of carbon dioxide by 50% over the next eight years, with a final objective of absolute zero by 2050. The path to net zero starts with energy-efficient, 100% electric buildings powered by onsite and offsite renewable energy, said Billy Grayson, executive vice president of centers and initiatives at the Urban Land Institute. That goal applies equally to commercial buildings and single-family homes.

With new construction, reducing carbon by 50% is relatively easy. Lower emissions can be factored into the design plan from the very beginning, said Grayson. He added that building an all-electric building can also reduce construction costs, since dual systems for gas and electric won’t need to be installed.

For current buildings that need to be brought into compliance, Grayson said, the trick is to do it comprehensively and cost-effectively—the latter can be particularly challenging for owners of office and multifamily buildings who have tenants that need to be brought on board. “Figuring out a way to get tenants to net zero is something a lot of people are scared of,” said Grayson.

The first step in making any building more energy-efficient is facility management—and it actually involves no cost. Though “facility management” sounds like a lofty term, said Grayson, it involves simple actions that aren’t too onerous for tenants or home owners. For example, asking tenants to turn out the lights when they leave the room, increase the temperature of refrigerators by one degree, raise the thermostat temperature by one degree in the summer, or lower it one degree in the winter can all make a big difference. “You can even make it a contest and post how tenants are doing floor by floor,” said Grayson. “You can use bribery or shaming to encourage everyone to participate.”

The second step is performing facility upgrades in a building, which can also be done by home owners. Fluorescent and incandescent lighting can be replaced by low-cost, energy-efficient LED lights. Electric heat pumps can be installed to replace oil or gas heating systems. And smart technology can be installed to enable thermostats, lighting, appliances, and security systems to automatically adjust to changing energy needs. In addition, both Fannie Mae and Freddie Mac offer low-interest loans for multifamily owners who want to make energy-efficiency upgrades.

Power for all-electric buildings can come from onsite or offsite renewable energy sources such as solar panels or wind turbines, with offsite being the most practical and cost efficient for many commercial and residential owners. “More utilities and banks have figured out ways to give you benefits at scale offsite,” said Grayson. “You can buy a share in a big energy field somewhere and lock in an ownership agreement for 20 years. You can also buy a share of a project in another state.”

And one question naturally arises with 100% electric buildings: What happens in the event of a power failure? “You will definitely want to have backup power with all electric,” said Grayson, who recommended battery backup systems and diesel generators. Grayson also extolled the virtues of the two-way charging system currently employed by certain electric car batteries that allows electricity to be pushed back into the electrical grid. He posited a time when all buildings and homes would be capable of both giving and receiving energy. “Every building becomes a node or substation on the grid,” said Grayson.

The city of tomorrow today

Evan Regan-Levine, executive vice president of REIT company JBG Smith, offered a glimpse of what the city of the future will look like. JBG Smith is the majority owner and developer of the National Landing mixed-use urban community that is currently under construction in Virginia. Encompassing parts of the neighborhoods of Crystal City, Pentagon City, and Potomac Yard, the new community will have the largest walkable downtown in the state and will include offices, apartments, restaurants, shops, parks, hotels, entertainment venues, and bike paths, as well as increased investment in the area’s current transit lines and airport. JBG Smith has also attracted desirable employers to the area with investments in digital infrastructure, high-tech, and energy-efficient buildings, and the development of diverse housing options for workers that will include “missing middle” housing.

The area that is now National Landing wasn’t always thriving. Up until 2018, workers flocked to the area’s offices during the day and then abandoned the place at night. According to Regan-Levine, 50,000 people came into the area every day to work; fewer than 10,000 lived there. With excellent transportation infrastructure already in place, JBG Smith knew the area was ripe for development as a “smart city”—a city that combines the best of current technology with the attributes that make for a healthy, sustainable community. “We went to work on our foundational principles,” said Regan-Levine. “We wanted to add bodies at night. We wanted to transform this place from a 9-to-5 office site to an 18-hour multiuse neighborhood.” The company’s vision was “all about the human experience,” he added.

Transforming the neighborhood involved JBG Smith’s reaching out to Arlington County where the land was situated, and entering into talks with major employers like Amazon and Virginia Tech. In the end, government, private enterprise, and myriad other organizations were able to work together on the planning, design, and implementation of National Landing.

“This is the resilient city of the future,” said Regan-Levine. “It’s not just a parlor trick.”

Source: The City of the Future Is Right Around the Corner REALTOR® Magazine (May 9,2022) Catherine Mesick