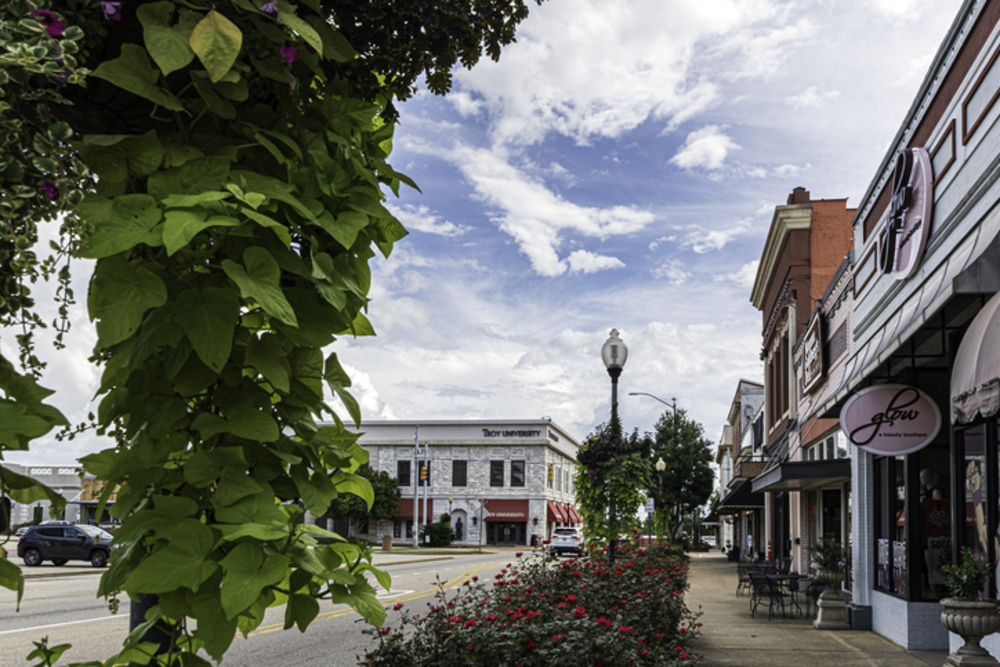 Is it the quirky bookstores, or the quirky coffee shops? Maybe it’s the bars, the wide grassy commons dotted with ancient trees, or the overabundance of lectures, concerts, and football games that make college towns so irresistible for folks of all ages.

For me, it was the music, the snowboarding, and the Aspen-like hills and mountains around Northern Arizona University that hooked me early in Flagstaff, AZ. College towns are just comfortable—simultaneously casual and engaging. No matter your age, a youthful spirit saturates the place.

And there’s something else: In an era of real estate volatility, buying a home in a university town is looking more and more like a genius-level investment. After all, the customer base runs the gamut from well-heeled students or recent grads looking to stay put, to young families or seniors looking for a vibrant, culture-rich place for their forever home. There will always be strong, steady demand for homes in college towns from both young and old buyers as well as rental opportunities for those interested in becoming landlords.

Now, with classes starting up again, college towns—and their real estate—have shifted back into focus. However, in the face of sky-high home prices, finding an affordable college town to settle into isn’t quite so easy anymore. That’s why Realtor.com®’s data team scoured home listings from all over the country to find the college towns where buyers can still find reasonably priced homes for sale. They do indeed exist—especially in smaller towns in the Midwest and South where real estate overall is typically less expensive. They may just lack the big name recognition of much larger, more expensive college towns (sorry, Boston!).

To come up with our list, we identified cities where students accounted for 25% or more of the overall population. Each of these cities had between 15,000 and 200,000 residents. Then we sifted through Realtor.com® listing data in August to find the most affordable college towns. We limited our list to the single-most affordable city per state to achieve geographic diversity, and cities with at least 20 active listings to ensure enough data to determine median listing price.

All but one city has a population between between 15,000 and 30,000—a small town by any measure. And none of the median home prices come near the current national median of $435,000 in August, according to Realtor.com data.

So where can scholarly buyers go to find a a good deal on a home? Here’s the top 10.

Some of the most affordable college towns—Macomb, IL (No. 1), Hays, KS (No. 2), and Warrensburg, MO (No, 6—are located in smaller communities throughout the nation’s heartland. Each of these cities only has between 15,000 and 21,000 residents—about a third of whom are college students.

Macomb, IL—tucked into the western edge of Illinois, close to where the corners of Iowa and Missouri meet—had the lowest median list price of just $59,950, based on August listing data from Realtor.com. The city is home to Western Illinois University, which boasts that it freezes tuition, fees, and room for students who remain enrolled for four consecutive years.

Local real estate broker Nick Curtis, of Re/MAX Unified Brokers, credits growing up in Macomb with preparing him for college at the University of Illinois at Urbana-Champaign (about two-and-a-half hours east). Most of his clients now are Western Illinois University staff and faculty who hail from across the globe.

“You have people from all over and from all different backgrounds,” he says.

For older adults moving to the area, he finds many are “lifelong learners” who value living so close to the university and are participating in campus activities. There’s even a local group of residents, Curtis says, who help new students move in, carrying boxes and furniture to their new dorm rooms.

“You get to go back and remember what it was like to be doing the same thing 25 years earlier,” he says.

Low prices in the heartland are a big draw for homebuyers in these university towns. Median prices in Hays, KS, where Fort Hays University is located, and Warrensburg, MO, home to the University of Central Missouri, are very reasonable at $167,500 and just under $250,000 respectively.

Buyers in Hays can score three-bedroom ranches for under $150,000, while those shopping in Warrensburg can score a four-bedroom house with vaulted ceilings, a jetted tub, and an oversized deck for about $250,000.

Those looking for affordable college towns may want to search near Minneapolis. Winona, MN (No. 4), is less than two-and-a-half hours southeast of the larger city, while Menomonie, WI (No. 9), is just over an hour east of Minneapolis.

In Winona, a town of about 26,000 on the Mississippi River, you’ll find Winona State University.

Realtor David Taylor, of Edina Realty in Winona, works with a number of buyers who went to the school there and returned for good. Winona has a quirky downtown, he says, with nice coffee shops and restaurants.

“Everything is local,” he says. “We’ve got some cool local breweries, and then you’ve got Main Street, which is kind of the center of it all.”

Plus, it’s got all kinds of outdoor lifestyle attractions.

“You’ve got hiking, biking, kayaking, all kinds of outdoor stuff on the Mississippi River and the lakes and our bluffs,” he says. “It’s a gorgeous town—so scenic.”

Menomonie, home to the University of Wisconsin-Stout in the Red Cedar Valley, is another attractive option for college town aficionados. There are plenty of restaurants, locally owned shops, cafes, and breweries, as well as the Mabel Tainter Center for the Arts, which hosts musical acts.

Menomonie’s median home list price was $296,450 in August, according to Realtor.com data. Buyers can find charming, two-bedroom, three-bathroom houses for about $235,000, or renovated ranches for about $240,000.

The college spirit lives strong in the Southeast

Troy is home to Troy University, which has come to be known as “Alabama’s International University” because of its academic fields with an international scope and its emphasis on attracting foreign students.

About an hour south of Montgomery, AL, Troy is small, and the university makes up a sizable portion of the population. The median listing price there now is just under $200,000. Buyers can find newly constructed homes in the mid-$300,000s or save some money on smaller homes that may need a little updating.

Southeastern Louisiana University is what puts Hammond on the list this year. The city is about an hour northwest of New Orleans, on the other side of Lake Pontchartrain. The town has several breweries, including the Gnarly Barley Brewery, a bookstore, and plenty of family-friendly activities, like the Safari Quest Family Fun Center and the Louisiana Children’s Discovery Center.

Like many of the cities on the list, Hammond is fairly small, at around 20,000 total residents. However, students have easy access to nearby New Orleans. Hammond’s current median listing price is $238,000.

Huntsville, TX, is the largest of all the cities on this year’s affordable college towns list, with a population of about 46,000. The home to Sam Houston University is only about an hour north from Houston. That makes it just close enough for students to get into the big city for a night out. However, the community still has a more rural feel, says Bill Tutor, a real estate agent at Pinnacle Realty Advisors in Hunstville.

“The rodeo team at the university is real big, and [the university] is just breaking ground on a new equestrian center and a new arena,” he says.

Tutor says he deals with a lot of parents who want to buy a place for their kids while they’re in college. The median listing price is about $272,000.

“A lot of times, they turn it into a true rental after that, and they keep it going that way,” he says.

The last college town on this year’s list, Clemson, SC, might be the most recognizable. The town is known for Clemson University and its three-time national champion Clemson Tigers Division I football team. Residents can’t miss the orange paw prints emblazoned on just about everything in the town.

Many of her clients are graduates, faculty and staff, as well as retirees whose children attended the school. The area is also popular as a vacation spot because of the nearby lakes.

However, Clemson is the most expensive town on the list with a median price tag of $300,000.

“Whether it’s recent graduates or 30 or 40 years down the road, they gravitate toward back to the area,” Slabaugh says. “Our Clemson market is beyond hot. If it’s priced right it will go in between 12 and 36 hours.”

Appalachia has a great college town, too

Those looking for a lively college town shouldn’t overlook Radford, VA (No. 8), on the list. The riverfront city, in the northwestern swath of the state not far from the West Virginia border, has plenty of restaurants, waterfront parks, and a burgeoning arts scene

Radford University, which started started as an all women’s college but now is also open to men, calls the city home.

Keith Gore, a Realtor with Berkshire Hathaway HomeServices Mountain Sky Properties in Radford, says there’s a strong college town feel to the area, especially because it’s only about 10 miles away from Virginia Tech.

“The whole area is a college scene,” he says.

However, Radford isn’t overwhelmingly busy. Radford University is at the center of the town, and its open commons space is where students can be found in the warmer part of the year. The university’s Donald N. Dedmon Center is a multipurpose arena that’s the center of campus sports and even concerts.

“It’s a smaller town, with a college campus feel,” he says.

Buyers can check out this updated, three-bedroom, one-and-a-half bathroom house with a screened-in porch for about $270,000. Those looking to rent out rooms to students for some extra cash may want to consider this five-bedroom, three-bathroom house for $259,900.